I love a good burger. In fact, I’d go as far as calling it my favorite food. I’m a fan of Larkburger’s fast casual set up, The Dark Horse’s Jiffy Burger (who knew peanut butter, bacon and provolone worked?) and I frequently build and grill my own concoctions.

As a respectable burger eating citizen, I’m typically against ordering a burger through HungryBuffs or GrubHub but last weekend I was watching a Food Network burger special and I was hungry. Only a burger would satisfy and there was no way I was about get off my couch to go find one…

Enter: Drake’s Haus. This fairly new burger spot off 28th and Baseline caught my attention with their “merlot infused” burgers (burger’s and wine!? This place must be made for me!). At $5.25 a burger, I figured it was a no brainer! They featured gems like the French Burger (merlot infused patty topped with brie cheese and rosemary apricot jam) and the South American burger (merlot patty, chorizo and cherry fennel goat cheese). We decided to give the burgers a go and ordered through GrubHub: 2 burgers, one “fiesta fries” + delivery charge ($4.99) + tip… $22. The delivery charge was steep but I considered it a tax for my laziness. When our burgers finally arrived I thought there was a mistake “They forgot one!” I said as I opened up the box. Oh wait… no they didn’t, they’re just small enough to fit into one box. In fact, they’re sliders. Not burgers. We were both hungry and we had a feeling one tiny burger was not going to cut it. We went along with it anyway and dug in.

First up: The Oregon Burger (aged cheddar, bacon, and carmelized onions piled high. WOW! Pretty exceptional flavor and grilled to perfection. Who knew such a tiny burger could pack such a flavor punch? I’m a bit more adventurous when it comes to my palette so i opted for the Bordeaux burger: blue cheese, blueberry lavender jam and frisee greens tossed in a champagne vinaigrette. It was absolutely amazing! Perfectly cooked and with such a dynamic combo of flavors, I never wanted that burger to end. Except that it did: In three bites. Seriously, was I the only person who didn’t know Drakes Haus only served sliders!? I knew $5.25 was cheap, but they should really call them sliders if they’re only 3 oz. patties… I know they said 3 ounces on the menu but I read in words, not numbers. “3 ounce sliders” is a lot more descriptive than “3 ounce burgers”. The Verdict: The three bites of burger were extraordinary! (Seriously, one of the best burgers I’ve had in a while) however, I wish the “slider” status was a little more explicit so I could plan accordingly; aka, ordered more than one. While they arrived piping hot and in tact, I would not recommend ordering these for delivery. For the price and quantity of the burger, you end up spending  way more than you would at the restaurant. I guess that’s what I get for being lazy 😉

Have you been to Drake’s Haus before? Were you as surprised by the size as I was? Let me know in the comments below! 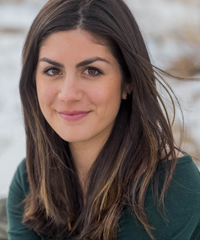