Have you ever looked at the Hill and thought “I would totally ride a giant slip and slide down that.” Well you are’t the only one. Is 1000 feet going to be long enough for you? That’s 3 football fields. 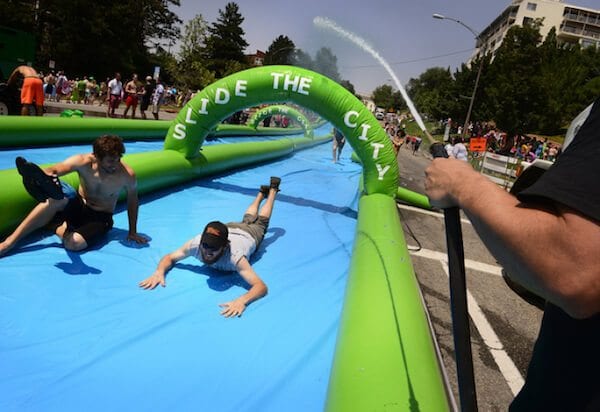 July 18, 2015, a Guinness World-Record holding waterslide comes to Boulder, and will carry thousands of sliders down the landmark Hill. The slide will be placed on 13th street and will open at 9am. Sliders are organized into waves due to the sheer number of them—23,000 people are “Going,” according to Facebook. Unfortunately for those just hearing about it, the event is sold out, but the thousands of people registered guarantee that the slide won’t be the only attraction of the day.

Live music, food and beverages will accompany the USA-made, padded vinyl slide. This is a family friendly event so bring the kids out to squirt, splash, and spray with the Boulder community. Just make sure those water guns don’t look real, and that you use plenty of sunscreen!

Slide the City will travel across the US and Canada staging sliding events in 150 major cities this year. Besides raising awareness of how hyperbolized backyard toys are awesome, the crew wants to raise awareness about fresh water usage and conservation across the world. Fresh water is one of the world’s most precious resources. You probably know that already, but it is “Mad Max: Fury Road” important on a global scale. Slide the City’s international tour will donate a portion of its proceeds to generosity.org, a humanitarian organization aiming to end the clean water crisis in developing countries.

The slide this Saturday will use somewhere between 9,000 and 20,000 gallons of fresh water. That’s a lot. By my own (nerdy) calculations, that’s up to a bathtub’s worth of water every 3 minutes. But the water is recirculated, reducing the overall water needed for the slide. At the end of the day, the remaining water will be given back to the city’s water treatment plants, parks, or recycled however Boulder officials see fit.

Slide the City also donates a portion of their proceeds to a local charitable foundation. They have partnered with the Volunteer Resource Center at CU Boulder to raise funds for the Alternative Breaks program. This program allows students to utilize their breaks from school for volunteering in other communities and learning about social issues outside of their own locales. Awareness is the first step towards activism, and Slide the City is all about awareness. 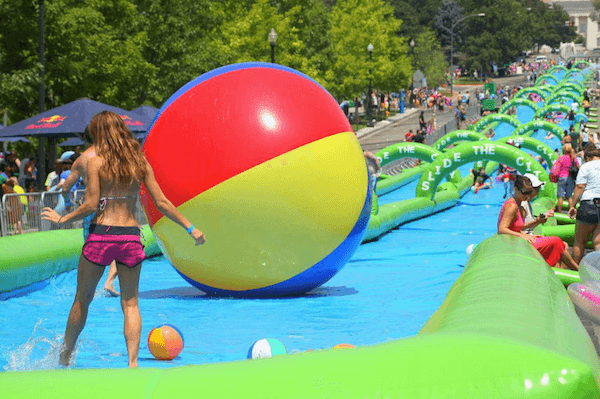 Slide the City asks everyone to reduce the amount of fresh water they use, and it doesn’t take much to help conserve. Cut a minute or two from your shower, fix leaky faucets, or cut down on car washes to make a positive impact on water conservation efforts. Whether or not you are sliding this Saturday, it is important to remember that not everyone has the same resources you do. An estimated 748 million people do not have access to clean water. If everyone put forth a fractional effort the future would be populated with more smiling people zipping head-first down crazy huge water slides.

Joe Inclan
Originally from Lone Tree, CO, Joseph Inclan graduated from Regis Jesuit High School in 2010. He applied to just two universities, DU and CU Boulder, and was accepted by both. Joe chose CU for its beauty, and the appeal of the open-minded and quirky city ensured him how right he was to choose Boulder. With a Bachelor’s degree in both English Creative Writing and Philosophy from CU, he has dabbled in everything from poetry to basic technical articles for 3DPrintingIndustry.com. His hobbies have a range too, from fountain pens and handwriting, to yoyos and skill toys. The most important thing for Joe is to understand things complexly. Boulder and its residents live in an evolving miasma of ideologies and cultures which demand more than a 2-Dimensional perspective. Joe’s fascination with Boulder stems from the fact that it is far more than the sum of its parts, and that is a unique quality. He is glad to be a writer with AboutBoulder.com and looks forward to spreading his knowledge of Boulder with the community.
See More Articles From Joe Inclan
Tagged: About BoulderaboutboulderABOUTBoulder.comboulderBoulder CountyCollegeColoradocommunityCUEventsfamily funfunlocaloutdoorsrecreationslidesportsstudentssummerThe HillwaterWorld Record
Boulder Colorado Air Quality