Home » Uncategorized » A Cause to Be Thankful For

A Cause to Be Thankful For 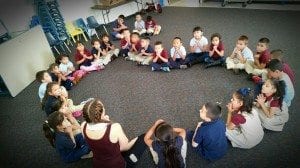 Kids gather in a heart-shaped circle to learn about the principles of yoga.

Two-year-old Arabesque Yoga, a non-profit operating under the Boulder Yoga Project, launched its #GivingTuesday campaign this week to raise awareness and funds for a cause many of us here in Boulder can get on board with: bringing yoga to children in need.

Arabesque Yoga was one of a lucky few to be selected to participate in Indiegogo’s #GivingTuesday fundraising campaign. Like Black Friday or Cyber Monday, Giving Tuesday encourages spending money, but instead of splurging on sale items it’s a day of giving to businesses and non-profits doing their best to make a difference in their community.

The non-profit is the love child of founders Damien and Aiesha Teague. Together with teacher and story manager Brandy Simmons, and lest we forget their dedicated yoga teachers, Arabesque Yoga has struck up a partnership with Denver Public Schools to “meet kids where they are,” as Simmons puts it, in their classrooms, learning what they need and delivering it through yoga.

The team at Arabesque shows children ages 4 to 12 years old, with a few teen classes mixed in, yoga basics including mindful breathing, poses and meditation. They work to illuminate an alternative means of coping in an environment that isn’t always kind to kids.

“We take yoga to kids everywhere but namely Denver Metro-area, inner-city kids, the ones who maybe don’t have the best home life whose socioeconomic status isn’t helping them,” Simmons said. “We go in, and there’s a lot of trauma — first graders with suicide rates — so we sit with them to sit still but also to move and play.”

During its first year, Arabesque Yoga taught more than 500 classes in Metro-area schools. It will end this year having more than doubled its reach to more than 1,200 classes. These teachers aren’t just upping the class count, they’re getting results, too. Teachers, parents and even school counselors have reported a marked difference in all of their yoga-practicing students, but most especially in those who struggled previously to make it through even a day, Simmons says.

One day the passionate teachers at Arabesque Yoga hope to branch out and also create a training program for recent foster care grads, because a lot of those kids don’t get a start after foster care, Simmons says. The No. 1 goal today, Simmons says, is simply to “teach kids to turn any environment into somewhere where they can feel safe and healthy.” 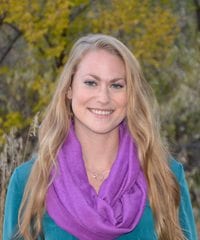