Kolby Harvey has one of those souls so filled with light it’s almost visible, and it shows in his work.

His newest project is a series of cut out horoscope poems designed to look like popular food products. For example, there’s the CocaCloaca, a Coke can containing “shit” as its sole ingredient. The image can be cut out and folded to look like an actual can, but the words are wildly different from what one might expect. 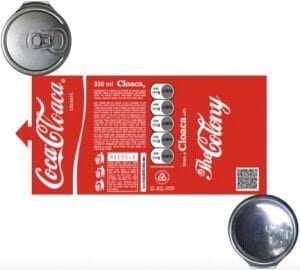 There are also references to The Martian starring Matt Damon and the inherent (unchecked) masculinity of his character who spends the entire movie alone on Mars trying to survive.

“This week, Taurus, you’ll need to channel Mr. Damon. Even in the face of certain death, cling to the last splinter of masculinity left inside you, cling to it as if your life depended on it because it does, Taurus. Don’t ever let them know you like disco.”

The words are haunting, “don’t ever let them know you like disco” because “disco” doesn’t fit into a modern narrative of masculinity. The passage ends with “when there’s no more water, let them drink cloake.” Here, “cloake” is a play-on-words between Coke and cloaca. 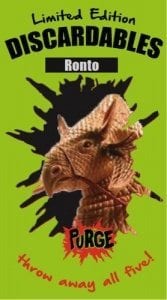 A section of “Purge”

There’s also “Purge” designed after the 90s soft drink Surge, also produced by Coca-Cola. Surge was discontinued in 2003, but is now available to order from Amazon.com after a Facebook group rallied behind its rerelease during the peak of 90s nostalgia in 2014.

Purge’s mascot features a ronto, a four-legged Saurian herbivore from the Star Wars universe. Though the animal has the appearance of a menacing and powerful dino, rontos were skittish and easily startled and require a great deal of water for their survival. I don’t think Surge would quench the thirst of a ronto, but the juxtaposition highlights this absurdity. I’m also willing to bet there’s an intersection between the people who fought for the reproduction of Surge (Coco-Cola’s version of the popular gamer soft drink, Mountain Dew) and Star Wars fandom so, not only does ronto fit aesthetically into this new branding, but it also fits from a commercial marketing perspective.

What I love most about these poems/stories/horoscopes/bits of text (whatever you want to call them) is their industrialized feel. This is an art designed for mass production, printed in the millions on giant, unmovable machines. They critique that kind of production as intelligently as they utilize it.

Harvey’s art isn’t just pretty to look at. It teaches us something about the connections in the world around us. Kolby Harvey’s art seeks to make us all better people by sharing with us a little bit of his light.