America, I’m Very Disappointed In You 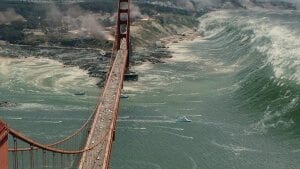 On the weekend of May 29, the film San Andreas was released. During that weekend alone, it made over $54 million. That means it’s on track to be a hit domestically. I have no doubt it will be a gigantic success overseas. Star Dwayne Johnson now has the cache to make things happen.* But the question is…why?

It’s got dull CGI effects. It’s got a lazy script.** It’s a movie so appallingly terrible that Jenny McCarthy wants her kids vaccinated against it. And it doesn’t really seem to matter.

Johnson plays Ray, a hyper-competent helicopter pilot and leader of a Los Angeles Fire and Rescue team. In the opening scene, Ray and his team save a young woman trapped in a car dangling precariously over a crevice. It’s a fun scene, and Ray refers to his team as “family.” While these thrilling heroics are taking place, CalTech seismology professor Lawrence Hayes (Paul Giamatti) and his team have conveniently devised a way of accurately predicting earthquakes. During a test at Hoover Dam, a nasty quake hits. The bad news is, Lawrence’s equipment shows that this was merely a precursor for a greater disaster.

This being a disaster movie, there must be “character development.” Ray is estranged from his wife Emma (Carla Gugino), and their daughter Blake (Alexandra Daddario) is heading off to college. Ray dotes on Blake and wishes he could repair his marriage. But alas! It is not to be, as Emma’s new boyfriend is billionaire Daniel (Ioan Gruffudd). I should point out that billionaires are always evil in movies, unless they’re Batman or Iron Man. Then they’re amusingly eccentric.

Anyway, the Big One naturally hits. Blake and Emma are trapped in the chaos. Now, Ray must choose between doing his duty and saving his family. As it turns out, that choice takes approximately .0023 seconds to make, and he immediately leaves to track them down. Seriously. Oh, and remember his team that he thinks of as family? Yeah, we never see them again. Seriously.

There’s a whole lot of issues with San Andreas, but the main one is that it takes a performer like Dwayne Johnson and turns him into a selfish jerk. His character is supposed to be all about saving lives, right? But as soon as he hears that his family is in trouble, we never see him conflicted. We never see him grappling between doing his job and protecting his loved ones. In fact, once disaster really strikes, Ray is so focused on saving his family that he doesn’t stop to help people unless it’s absolutely necessary. Some hero.

Part of the problem is that Johnson, a guy who absolutely bleeds charisma, is an actor that Hollywood has trouble using correctly***. He’s a whiz when it comes to action, he’s got excellent comic timing, and he’s a pretty solid dramatic actor. But here he’s a sad-sack family man with baggage that nobody cares about. It takes talent to suppress a guy as expressive as Johnson, but I’ll be damned if director Brad Peyton doesn’t accomplish it.

A word about Peyton. He’s another hack director, who prior to this directed Cats & Dogs: The Revenge of Kitty Galore and Journey 2: The Mysterious Island. Martin Scorsese he ain’t. Yes, he’s able to keep the action moving along, and yes, he’s able to handle lots of CGI people being slaughtered by collapsing CGI buildings and towering CGI tsunamis. But in a movie where literally millions of people die, Ray and his family are the only ones who matter.

Peyton isn’t completely to blame. Screenwriter Carlton Cuse energetically embraces disaster movie cliches, with the Evil Billionaire and The Scientist Nobody Believes Until It’s Too Late. It’s weird, because Cuse has worked extensively in TV, and he did a lot of writing for Lost and Bates Motel. Any nuance he utilized there sure isn’t on display here. Maybe he lost a bet?

So why has my beloved country clasped this titanically crappy movie to its breast? Is this yet more evidence that most Americans have terrible taste? Don’t get me wrong, I’m the last guy who will snootily look down upon a summer movie. I love summer movies. But I love summer movies that have a brain, a point of view, a sense of humor. Something like Guardians of the Galaxy or Mad Max: Fury Road. There’s a certain school of thought that, if a movie is fun or exciting, it must not be any good. People that believe this are wrong, and I sincerely pity them.

Is it because we have an insatiable lust for spectacle? The Transformers movies, a franchise so bad that it’s been known to cause hysterical blindness, have made over $3.5 billion worldwide. Maybe we’re at the point that we just want to see stuff get wrecked, and story or character doesn’t really matter. But the only way to go any bigger than San Andreas is to make a disaster movie where the planet literally cracks in half. Maybe in that movie Dwayne Johnson will steal a spaceship to save his family, while everybody else perishes in pixelated agony.

*Word is that he wants to star in a remake of the cult classic Big Trouble In Little China. While remakes have been around forever, it makes me insane when executives choose to redo something that was perfectly good in its original state. Why not take a cue from Steven Soderbergh and remake lousy movies? For example, the original Ocean’s 11 is awful, while Soderbergh’s remake is a fun lark. But that’s what happens when you let people who went to business school run movie studios.

***You could make the argument that Michael Bay, of all people, is one of the only directors to use him to full effect. In Pain and Gain, Johnson plays a weightlifting born-again Christian with a nasty cocaine habit. The guy is absolutely magnetic, and he’s hilarious, scary and pathetic, sometimes all at once.

Tim Brennan
Tim has been alarmingly enthusiastic about movies ever since childhood. He grew up in Boulder and, foolishly, left Colorado to study Communications in Washington State. Making matters worse, he moved to Connecticut after meeting his too-good-for-him wife. Drawn by the Rockies and a mild climate, he triumphantly returned and settled down back in Boulder County. He's written numerous screenplays, loves hiking, and embarrassed himself in front of Samuel L. Jackson. True story.
See More Articles From Tim Brennan
Tagged: brad peytoncarla guginodwayne the rock johnsonioan gruffuddpaul giamattisan andreas
Boulder Colorado Air Quality