Home › Blog › Beautifying You With Science

Beautifying You With Science

So… two things blew my mind this week and simultaneously confirmed that I live in a delicate balance of stupor and caffeination. 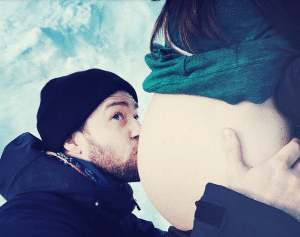 He posted this in January. The baby was born April 9th! HOW DID I NOT KNOW THIS?

I once considered taking a job in Bozeman, Montana and WHAT IF I WAS HIS BABY’S PEDIATRICIAN!?!? Yes, of course this is relevant.

Clearly there’s more beauty in the world now that a member of *NSYNC has procreated.

The second mind blowing factoid is this, which also surfaced back in January, but I just found out about this week: 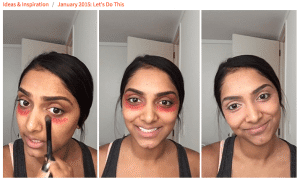 Yes, January. Not October, where one might expect creepy blood rimmed eyes… but January.

She’s using red-orange lipstick as concealer. Not for Halloween, but for her regular life make-up.

Is your mind not blown?

Both of this week’s revelations emphasize the amazing wonders of science. The first, bouncing Baby Timberlake, came about through fertilization, zygotes, embryos, yadda yadda, biology. I’ll let junior high health spell that one out for you.

The second capitalizes on the opponent theory of color wavelengths in the visible spectrum. That necessitates a longer explanation that includes physics and frequency and things I’d rather not worry about on my weekend. 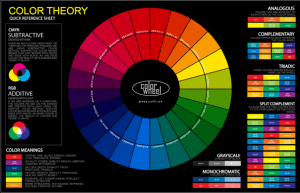 It’s not just random rainbow. It depicts the hues detected by the human eye at various wavelengths of light. 180 degrees from any color is the opposing color. So, for example. Let’s think about the color of my undereyes:

I sport a nice heavy blue below my eyes. It’s very flattering amongst the vampire/zombie set.

For humans however, having the appearance of subtle bruises beneath your eyes isn’t exactly fetching. So, based on the Opposing Theory of colors, I should apply the color 180 degrees (AKA directly across the circle) from my under eye color if I want to cancel the color out. Thus: 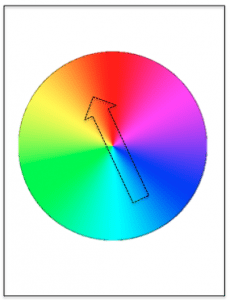 A red-orange hue should cancel out my blueish blue! That’s precisely what Deepica Mutyala is banking on. And frankly, it’s genius: 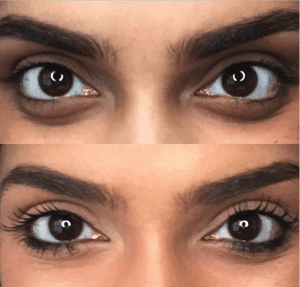 For a full tutorial, you can find her vlog here: 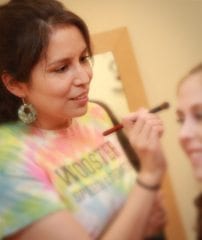