You don’t get to look like me without being a foodie. I’ve joked with my wife that she married a man who will never have rippling muscles or six-pack abs. It’s all because I love food. The preparation of it, the eating of it, and the reminiscing of it. There’s something special about it, and the right meal eaten at the right place with the right people can be nothing short of magical.

I’m a foodie, but I also know that the foodie scene sometimes gets to be…well, a bit much. At a local pizza place in Boulder a few years ago, our waiter regaled us with the quality of the ingredients. The sauce came from tomatoes grown in the volcanic soil of Mount Aetna. The pepperoni was locally sourced and free-range. He told us all of this with a straight face and a demeanor that suggested we’d be thrilled to have this information. It took all the self-control I had to not laugh.

Look, I understand there’s a very real artistry to cooking. It’s a fusion of art and science that can yield astounding results. I also understand that there are wildly expensive restaurants out there run by egomaniacs. Gullible rich people pay for meals that are nearly microscopic and are made with the most pretentious ingredients possible. That concept is ripe for mockery.

Most films about food tend to be comfy and pleasant. Big Night is a clever, warm, and loving look at what it takes and what it means to feed people. The new black comedy The Menu is the anti-Big Night. It’s a film that’s smart, scabrous, horrifying, and very funny.

Hawthorne has opened. Wait…you haven’t heard of Hawthorne? I probably shouldn’t mention it, but it’s not just exclusive, it’s perhaps the most exclusive restaurant out there. Located on a small private island only accessible by an equally private ferry, Hawthorne was designed for a singular culinary experience. It could only have been designed by celebrity chef Julian Slowik (Ralph Fiennes).

Tyler (Nicholas Hoult) is tremendously excited. He idolizes celebrity chefs the way suburban guys look up to sports stars, and for a mere $1250 per person, Tyler has the opportunity to experience a multicourse meal at Hawthorne. His companion Margot (Anya Taylor-Joy) is somewhat less enthusiastic. She has an exquisitely calibrated B.S. detector, and while she’s down for a good meal, she’s certainly not going to seriously use the term “mouthfeel.”

Margot and Tyler aren’t the only ones visiting Hawthorne. They’re accompanied by a trio of annoying finance bros (Arturo Castro, Rob Yang, Mark St. Cyr), a wealthy seen-it-all couple (Judith Light, Reed Bierney), a washed-up movie actor (John Leguizamo) and his harried assistant (Aimee Carrero), and an editor (Paul Adelstein) along with the food critic (Janet McTeer) who made Slowik into a star. The maitre d’ is Elsa (Hong Chau), a woman of impeccable bearing and considerable passive-aggression. She confronts Margot, and cannot hide her annoyance that Margot was not expected. That’s only the first disquieting event. As the evening progresses, there will be increasingly bizarre monologues about the courses, secrets revealed, and courses that simply must be seen to be believed.

I loved The Menu, but I’ll admit that it’s a film best enjoyed by a particular palate. Director Mark Mylod knows a thing or two about cretinous rich people after working on Succession. That experience served him well here, and he creates an atmosphere that’s so pretentious it veers wildly into farce. Part of his genius is the film’s controlled tonal swings. At times, there are scenes of straight-faced absurdity. At other times? I was as tense as I can remember, and I waited for something awful to happen. Mylod balances those tones without allowing the pacing to lag. When it’s funny, it’s really funny. When it’s tense, it almost veers into horror territory.

A film like this demands a script that’s intelligent and ruthlessly specific. Screenwriters Seth Reiss and Will Tracy initially based the story on a remote restaurant Tracy dined at during his honeymoon. A good script mocks the pretension of the restaurant, the egomania of the chef, and the blithe ignorance of the patrons. A great script recognizes how each character relates to this particular fine dining experience and makes it relevant to how the elite interact with art. This is a great script. 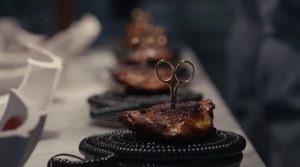 For the most part, the cast is wildly entertaining. As the zen control freak Slowik, Ralph Fiennes leans hard into playing a great man who’s not necessarily a good man. He’s equally matched by Anya Taylor-Joy, and her Margot uses guile and sarcasm against Slowik’s cultish disciples. Nicholas Hoult’s performance is skillful, and he shows us that Tyler is nowhere near as smart or sophisticated as he thinks he is. The MVP of the film is the icily hilarious Hong Chau. As Elsa, she acts as Slowik’s right-hand and enthusiastic enforcer. Chau plays her with such precision, yet she knows to briefly let the mask down and show us the madness lurking inside Elsa.

The Menu is one of the best films of the year. I’ll admit that it’s also a film that’s so specific, it will likely be off-putting to a wide slice of viewers. That’s okay for a film not to be for all tastes. For those with more adventurous palates, The Menu is a wildly enjoyable cinematic feast.

Tim Brennan
Tim has been alarmingly enthusiastic about movies ever since childhood. He grew up in Boulder and, foolishly, left Colorado to study Communications in Washington State. Making matters worse, he moved to Connecticut after meeting his too-good-for-him wife. Drawn by the Rockies and a mild climate, he triumphantly returned and settled down back in Boulder County. He's written numerous screenplays, loves hiking, and embarrassed himself in front of Samuel L. Jackson. True story.
See More Articles From Tim Brennan
Tagged: anya taylor-joyhong chaujanet mcteerjohn leguizamomark mylodnicholas houltralph fiennesseth reissthe menuwill tracy
Boulder Colorado Air Quality