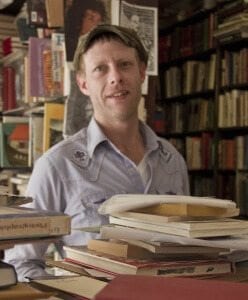 Because books are good, I walked into Red Letter Books on Pearl and met Seth, the owner.  A CU grad and a Colorado native (right?!), from Loveland, he has lived in Boulder this time around since 1995.

Seth is a second generation bookseller, his father owned a bookstore in Fort Collins. Seth took over from the original owner  of Red Letter a few years ago. He owned his own shop before then, but jumped at the chance to own a 25 year established store.

It was great to speak to someone who has  been here and has experienced the changes in Boulder over the last 17 years. As you can imagine, there are some things that he is wistful about and as we talked about the lack of a diversified music scene, the changing dynamic on Pearl St, and the changing demographics, he was still glad that he lived in Boulder and all that it offered.

When I asked him what he does when he’s not in the bookstore, Seth said he listens to a lot of music. He told me he used to help out and DJ at the CU radio station, playing punk and other alternative music. Of course he does read, but..”people think I read more than I do”

I asked him for a favorite author and he mentioned two. Blaise Cendrars, who was an author and poet from the early 20th century and D.A. Levy, a  beat poet from Cleveland, OH.

Seth, thanks for speaking to me today!