There’s one in every family. As sure as water is wet or the sky is blue, there’s always one. The black sheep. The bad boy, though they’re not always male. At family gatherings, they spin a tale of woe about how, yet again, they got screwed. That’s the best-case scenario. The worst is that they’re up in your face, all smiles, and they want to tell you about an amazing opportunity. All you have to do is loan them…I’m sorry, invest some money. You’ll get two, three, four times back what you invested. Guaranteed.

My family has one of those. I’d bet all your money that yours does, too. You know what else our families have in common? There’s always an enabler, maybe even a couple. They’ll defend the scumbag extraordinaire with the excuse that they just have really bad luck. Deep down, they’re a good person. And, for the sake of the family, everyone should just give them one more chance.

So how do these people keep getting away with it, over and over? Is it because they’re highly intelligent or wildly competent? Not in my experience, no. In fact, these folks tend to be dipshits of the highest order. They’ll tell obvious lies. Run scams that a five-year-old could see through. Put on a patina of charm that’s as genuine as margarine. People like this have two traits, I think. The first is a kind of cunning that allows them to zero in on weaknesses. The second is an emotional brazenness, a willingness to say or do what most of polite society won’t. That kind of person is the subject of American Murderer, a film with keen insights into a real person and a deadly chain of events.

When Jason (Tom Pelphrey) rents the house across the street, Melanie (Idina Menzel) doesn’t suspect anything. Why should she? Just look at him! Jason is a handsome guy who clearly takes care of himself. He’s a successful guy with a nice car and plenty of toys. He’s great with Melanie’s son and is a hero to all the neighborhood kids. Exactly the kind of guy you’d want as your next door neighbor.

Jason’s family adores him, too. Well…sort of. His younger sister Jamie (Shantel VanSanten) adores him, anyway. She looks at her big brother as a straight-up success, and while some of his stories don’t quite add up, Jamie is willing to let him slide. David (Paul Schneider) has a better idea as to his brother’s true character due to a shoplifting adventure, a scam involving stolen golf gear, and Jason’s habit of constantly borrowing money. Yet, he figures Jason is just taking a walk on the wild side. What harm could come of it?

Speaking of which, Jason’s mother Jeanne (Jacki Weaver) is perhaps the most clear-eyed in the family about the kind of person he’s become. After a three year absence in her life, Jason shows up. He spins a story about a wildly lucrative business he’s involved in. He wants Jeanne to share in the profits. All she has to do is “invest” twenty thousand dollars. She’s no fool, and Jeanne shows Jason the door.

Is it accurate to call Jason a con artist? Not really, since the term implies someone skilled in the arts of manipulation and a knack for long-term planning. FBI Agent Lance Leising (Ryan Philippe) has a more accurate sense of who and what Jason truly is. He’s strictly short-term, a guy who covers a lie with another lie and is always a step ahead of collections agents and loan sharks. He’s also someone who thinks he’s smarter than he actually is, and his greed and heedless confidence will get him in deep.

American Murderer is the first feature from director Matthew Gentile, which is kind of amazing. While many newbie filmmakers go nuts with show-offy shots and edits, Gentile has the maturity not to go in that direction. He knows the story is bananas enough and supports it with direction that’s clean and pacing that’s efficient. Decisions like that are smart. With luck, we’ll see more of his work from forward-thinking streaming services or studios.

Gentile also wrote the screenplay, and he’s learned one of the most important lessons in telling a true crime story. Too often, films focus excessively on the perpetrator, while the victims and family members of the crook barely get a mention. Not here, and while we spend time watching Jason Derek Brown behave like a real P.O.S., we also see how his loved ones react. Jeanne has her son pegged dead-on due to hard experience. David seems to indulge criminal fantasies and live vicariously through his brother. Jamie views everything through the prism of loyalty, no matter how bad Jason’s actions might be. All of the characters are three-dimensional and emotionally honest, and Gentile’s script allows us to understand their motivations.

Across the board, the cast is uniformly solid. It’s nice to see Ryan Philippe in a role requiring gravitas. He’s believable as a law enforcement officer who does a good job out of a sense of duty and professionalism. While other crime films explore the duality between cop and crook, this film is more of a study in opposites. Tom Pelphrey is excellent in his portrayal of Jason, a man who’s a creature of impulse. He’s always after the next scam, the next hook-up, the next brief moment of financial gain. Philippe’s Special Agent Leising sacrifices his personal time to work the case, whereas Pelphrey’s Jason probably never made a decision without calculating how it would benefit him first. The contrast between the two men is stark and fascinating. 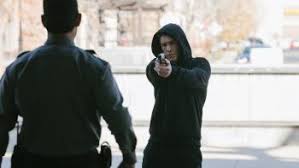 We should also take a moment to give Idina Menzel well-deserved credit. Her career began onstage and Broadway is where she shot to stardom. Due to the necessities of the physical space, stage acting is far bigger than what we’re used to seeing on-screen. But watch her scenes with Ryan Philippe as she learns her new boyfriend is someone very different. Menzel is remarkably subtle as she shows us disbelief and flickers of doubt at the same time. She’s fully inhabiting the role and reacting like a normal person would.

American Murderer doesn’t have awesome gunfights, inspirational speeches, or ham-handed romantic subplots. It’s content to tell a true story well, and considering the general cowardice and risk-aversion of American films, that alone is fairly miraculous. Real tension doesn’t exist in an Infinity Gauntlet or lightsaber. It’s in the friendly face of someone you’re sure you know, someone with the means to hurt you without giving it a second thought.

Tim Brennan
Tim has been alarmingly enthusiastic about movies ever since childhood. He grew up in Boulder and, foolishly, left Colorado to study Communications in Washington State. Making matters worse, he moved to Connecticut after meeting his too-good-for-him wife. Drawn by the Rockies and a mild climate, he triumphantly returned and settled down back in Boulder County. He's written numerous screenplays, loves hiking, and embarrassed himself in front of Samuel L. Jackson. True story.
See More Articles From Tim Brennan
Tagged: american murdereridina menzelmatthew gentilepaul schneiderryan phillippeshantel vansantentom pelphrey
Boulder Colorado Air Quality