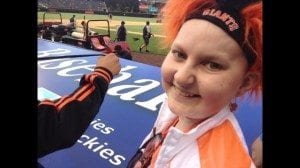 At the age of nine, a tumor was found in Kayla Armstrong’s brain, and she was diagnosed with cancer. She spent over 300 days in the hospital, undergoing chemotherapy, radiation treatment, a bone-marrow transplant, and many other arduous treatments and surgeries before finally emerging 18 months later with signs of great progress. She returned to the hospital for MRI scans for a period of two years before doctors could finally declare her cancer free.

Her father, Mike Armstrong, described Kayla as being positive throughout the entire strenuous process and praised her for maintaining the “best attitude ever,” according to the Daily Camera. She had won her battle with cancer and, according to her father, had won it “without a single complaint.” Unfortunately for the Armstrongs, it now appears that Kayla’s fight is not yet over.

About two months ago, on August 19th, Mike Armstrong and his wife came home to find Kayla, now 15, asleep at a relatively early hour and when she awoke, they found her to be completely thrown of her surroundings. She had suffered a seizure, and her parents immediately rushed her to the emergency room. After taking an MRI, it was discovered that Kayla had a large tumor in her brain; the same type as before. This time, however, doctors found it to be inoperable. Astonishingly, Kayla’s positive attitude seems to be just as resolute as it was during her first battle with cancer.

Kayla’s new diagnosis came just two months before her and her family’s most celebrated holiday: Halloween. Every year, right at the beginning of October, the Armstrongs bring in an enormous rack of Halloween costumes that the family plays with all month long. They cover their home, inside and out, with festive decorations and, after trick-or-treating, Kayla and her cousins celebrate the holiday with a grand candy swap in their living room.

Before Kayla’s diagnosis in August, her father had already been helping to plan and construct a large-scale haunted house at the north Boulder residence of a family friend, Von Bortz. They planned for the haunted house to be professional-grade and to be open to the public. It would be called, “the Four Mile Scare Home Haunt.” With the devastating news of Kayla’s new diagnosis, the Armstrongs decided that instead of giving up on the project, they would embrace the circumstance, and turn the Four Mile Scare Home Haunt into a benefit to raise money to help with treatment and medical bills.

Mike Armstrong has said that he expects anywhere from 300 to 1,000 people to attend the haunted house, which now boasts a mausoleum that is twenty feet tall, a skeleton maze, live actors, and plenty of creatively spooky features. The Armstrongs consider the planning and construction of this epic project to be a welcome distraction during this trying time. The haunted house has given Kayla and her family something fun and positive to talk about and look forward to. According to the Daily Camera, Mr. Armstrong considers it,  “a huge help to the quality of her life.”

And Kayla isn’t just sitting around during this ambitious project; she’s been helping all along the way. When the haunted house opens on Halloween, she plans to dress up as a zombie as a part of the act. “I don’t have a huge amount of energy, but right now I’m there, making sure it all looks good,” said Kayla, according to the Daily Camera. She then added, jokingly, “I will just walk around the whole place as a zombie; it’ll work out. I’ll just walk my normal speed and it’ll be like a zombie.”

The Four Mile Scare Home Haunt is located at 3980 Bosque Court in Boulder and will be open from 5 to 10 p.m. on October 31st. The hours of 5 to 6.p.m will be intended for very small children. The house will be open to the public and welcomes all ages. There is no cost of admission, though a voluntary donation to Kayla and her family is much appreciated. You can also contribute to Kayla and her family by clicking here to view their fundraising website. For more information, click here to browse their Facebook page.