She walks onto the stage softly, slowly. She stalls, observing the stadium, an audience of eight thousand animals sitting before her in the crowd. “HOO-HOO-HOO HA-HA!” She speaks, “That is chimpanzee for, ‘hello.’ I bring into this space the voice of the animal.” 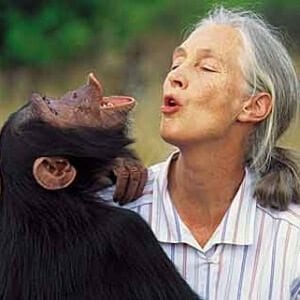 Dr. Goodall and friend speaking “the voice of the animal” (via Google).

Eighty-one year old Dr. Jane Goodall spoke at CU’s Coors Event Center on the evening of October 1st at 7:30pm. The largest lecture crowd to date, Dr. Goodall touches upon every prevalent topic of conversation happening today: air pollution, water polution, poverty, animal behavior and morality, Africa, Syria, the Oregon shooting, climate change, deforestation, education, healthcare and food policy. With an expansive team of physicists, scientists, biologists and anthropologists supporting the timeless findings of Dr. Goodall’s extensive evolutionary research, specializing in the commonalities of human behavior to that of chimpanzees, the greatest take-away was her embodiment of human-to-nature interconnectedness. Founder of The Jane Goodall Institute, a nonprofit organization advocating for the preservation of apes and their habitats, global understanding and a community-based network for animal and environment enthusiasts, she has observed and experienced that “when nature suffers, we suffer. When nature flourishes, we all flourish.”

For over fifty years, Dr. Goodall has accumulated abundant knowledge of human behavior through that of chimpanzees. The original hope was to study similarities between chimpanzees and human behavior, to better understand how our ancestry and how the early man and woman behaved. She discusses that “back then,” humans were defined as ‘the toolmakers,’ until she discovered chimpanzees peeling leaves from twigs to make tools as well. From that finding, she realized “we must now redefine man, redefine ‘tool,’ or define chimpanzees as humans. We didn’t know back then that the DNA of chimpanzees was only one percent different than us.” From further observation, extreme passion and persistence, Dr. Goodall witnessed the similar mannerisms we share, how expressive chimps are with grooming, kissing, hugging, and embracing others with friendly physical contact. We share societal norms of male dominance and protection of resources. She began to see chimps as our mirrors. She claims, “Like us, chimps are capable of violence or brutality. Chimps, like us, have a dark side. But chimps, like us, are also capable of true compassion and altruism.” She names that perhaps the one distinct difference is that humans know the extent of how our actions will affect another.

Dr. Goodall claims her greatest clarity being that “what separates us and the animal kingdom is a blurry line,” and that “there’s no way we can improve the chimpanzees unless we improve the lives of the people.” She has witnessed the first-hand affect of orphaned chimpanzees, deforested lands, suffering African villages, and the greatest concern being that humans don’t understand our place in this world, that we are living parallel to something intelligent, massively complex and beautiful instead of in accordance with it. The loss of wildlife and animals are often a hush-hush subject; out of sight, out of mind. But Dr. Goodall cannot turn away because she knows it’s a deeper reflection of our individual contributions to the world. She says, “I think there has been some strange disconnect between the intelligent human brain and the compassionate human heart. Every single one of us matters; we can make a difference every single day and we have a choice of what difference we make.” Most people fear we are “too late,” to begin what seems to be an already downward moving trajectory or destiny of doom…but if Dr. Jane Goodall is still hopeful, we have no reason not to be. 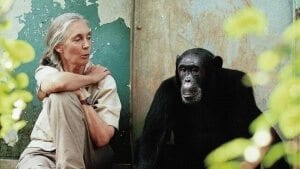 Dr. Goodall observing the nature of our fellow species (via Google).

She claims some of her reasons for hope being that: the young people are the up and coming change of this world, the amazing brain has the potential for good instead of evil, the resilience of nature allows animals on the brink of extinction to be given another chance, social media networking, and “the indomitable human spirit.” When asked how Dr. Goodall handles what she’s seen and how she lives, she humbly responds, “How can you slow down when there’s so much to do out there and my days on Earth are numbered?” Perhaps we should all be asking ourselves this question. It is no coincidence the greatest lecture attendance occurred in the eco-friendly, globally conscious and mindful society of Boulder, Colorado.

Jane Goodall epitomizes everything Boulder is. Her soul is one with ours. We are home to the activists, the visionaries, the warriors ready and willing to do something. There is a daunting amount of work to be done in this world, and it is the greatest gift to have the expert, the do-ers come speak to like-minded folk, assured their message will be received. Consider the torch passed, Dr. Goodall; we will not do you wrong.

Dr. Gooddall entrusts in our intelligence and ability to change, if only we’d stop getting in our own way. There is a reason why yoga facilitators bow to the class members as a mutual recognition of light and connectedness. There’s a reason we bless all living things. There’s a reason we’ve been told we must love ourselves before others, and also to love thy neighbor as thyself. There’s a reason we were taught in Kindergarten the “golden rule:” never do unto someone that which you wouldn’t want done to you. There’s a reason Marianne Williamson knows that our deepest fear is not our inadequacy, but our immeasurable power. She claims it is the light, not the darkness that most frightens us; but never once has Dr. Goodall been afraid of that light. In fact, it’s all she’s known and eminated. Everyone who attended her lecture left feeling brighter than when they
walked in, in spite of the weight of the topics of our current world’s condition. She could not have come at a more pressing time to speak truth about what matters, to those who matter.

We are what our next step is. We can use our power for good. We can live cleaner by leaving the space better than how we found it. We can appreciate our commonalities with other species and learn from them. We can use the world as our mirror. We can be taught and led and guided by its missions for us. We hold the capacity to be so good. The biggest kicker is not that we actually already are, but how few people know it. Light and love to all you activists, wanderers, seekers, advocates, public speakers, passionate, driven, focused, change-oriented folk. We need you now more than ever.