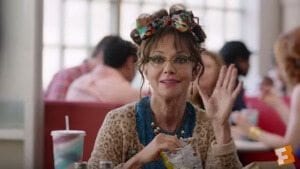 One of the most annoying movie cliches is that of the Wise Elder. Like Chuck Norris, they exist in a constant state of alertness, waiting for the perfect moment to impart the wisdom of their years to some callow whippersnapper in need of a good old-fashioned life lesson. The Wise Elder has no inner life, no desires, and no possibility of evolving.

I hate the Wise Elder role so much that my dream part for Morgan Freeman is to see him play an idiotic loudmouth whose terrible advice ruins the life of a promising young person. It does my heart good when I see an actor over the age of 50 not only reject this tiresome trope but actively take their role in the opposite direction. That’s one of the many reasons I liked Hello, My Name Is Doris.

Doris (Sally Field) is a sixtysomething woman living in Staten Island. She lives in the home of her recently deceased mother, and she finds herself surrounded by Everest-sized piles of clutter and a vaguely bored-looking cat.* Her brother Todd (Stephen Root) and his wife Cynthia (Wendi McLendon-Covey) want her to clear out the junk and put the house on the market. Their selfishness is mixed with genuine concern for Doris, and they push her towards a gentle therapist (Elizabeth Reaser) in order to get the hoarding under control.

Doris spends her days as a cubicle jockey for a trendy fashion magazine. As an anti-age discrimination holdout, she’s worked there for years, surrounded by snotty co-workers (Natasha Lyonne and Kumail Nanjiani) who treat her as a pathetic joke. Her wardrobe is comprised of second-hand treasures. She has a cat calendar because of course she does.

After her mother’s funeral, Doris attends a lecture by sublimely cheesy self-help speaker Willy Williams (Peter Gallagher), who specializes in unhelpful advice like, “Turn impossible into I’m possible!” Doris yearns for change, for something new. Change arrives in the form of her company’s new art director, John Fremont (Max Greenfield). John is handsome, fit, charming, and around half her age. She’s smitten by him, absolutely bowled over. When he remarks that he likes her cat’s-eye glasses, that’s all it takes to ignite an emotional and sexual firestorm. John is a nice guy, and he offers her friendship. Doris jumps at the chance, spending more time with him and less time with her own best friend Roz (Tyne Daly).

The trailers for Hello, My Name Is Doris make the film look like an endless quirk-fest, the kind of irritating indie comedy that attempts to be profound and clever, but comes off ironic and soulless. That bullet is dodged by director/writer Michael Showalter and co-writer Laura Terruso. As a veteran of legendary sketch comedy series The State and a writer/performer in Wet Hot American Summer, Showalter understands one of the fundamental truths of comedy. Characters and gags can get supremely weird, but there must always be an aspect of psychological honesty. In the midst of jokes about lesbian knitting circles and feckless Millennials, their characters always feel real.

Yet the film confidently walks a line between silly and serious. It takes a clear-eyed look at Doris’ feelings of powerlessness and the fact that her emotional development appears to have stalled out over decades. Plus, Doris doesn’t fit into our society’s rigid category of a woman in her sixties. We think a woman of that age should be a grandmother, a font of hard-earned and well-deserved wisdom, a matriarch with a spayed sex drive. Doris entertains numerous fantasies of making out with stud muffin John, and while the audience I saw it with tittered nervously at those scenes, is it really such a ridiculous notion that a woman of that age can reclaim some sexual agency?

The supporting cast is just that, they exist to support Field’s performance and journey. They aren’t fully realized, but they don’t need to be. In a film like this, brush strokes aren’t a problem as long as none of them overwhelm the lead. Field and Max Greenfield have nice chemistry, but Tyne Daly’s Roz nearly steals the entire show. Possessing acid wit and unshakeable realism, Roz is the kind of lifelong friend everyone should have, and she and Field believably feel like they’re in a comfortable, decades-long friendship.

But this film is really the Sally Field Show, and it reminds us yet again why she’s been in the entertainment business for over fifty years. She’s an acting icon, a figure so beloved that even the stench of something as odious as The Amazing Spider-Man 2 can’t touch her. There are a couple of reasons for her longevity. First, she’s a master when it comes to comedy. This is nothing new. Just watch her in the perfect farce Soapdish. Here, her timing is impeccable and she can get a laugh out of a swoon or a smile.

Field’s other strength is digging deep into the emotions of her characters. As Doris, she’s entirely a three-dimensional human being. Look at the scene where she first hears electronic music. As the song starts, she’s paying attention intently. Her head starts bobbing along to the beat, birdlike. Before you know it, she’s pogoing around the room, wearing an expression of absolute joy. She makes us feel moments like that, moments of failure, hope, lust, and determination. She is utterly Doris, living fully within the character.

Hollywood does a terrible job with roles for people “of a certain age.” It does an even worse job of roles when it comes to women. Hello, My Name Is Doris reminds us that those roles are not extinct. It’s a film that’s uplifting without being saccharine, and we’re all the better for it.

*Aren’t all cats vaguely bored-looking, though?

Tim Brennan
Tim has been alarmingly enthusiastic about movies ever since childhood. He grew up in Boulder and, foolishly, left Colorado to study Communications in Washington State. Making matters worse, he moved to Connecticut after meeting his too-good-for-him wife. Drawn by the Rockies and a mild climate, he triumphantly returned and settled down back in Boulder County. He's written numerous screenplays, loves hiking, and embarrassed himself in front of Samuel L. Jackson. True story.
See More Articles From Tim Brennan
Tagged: elizabeth reaserkumail nanjianilaura terrusomax greenfieldmichael showalternatasha lyonnepeter gallaghersally fieldstephen roottyne daly
Boulder Colorado Air Quality