Learning how to dispose of each type of waste properly can help to avoid threats to human health, animal health and environmental health. Hospital bills are not cheap, and exposure to hazardous wastes can turn into hefty hospital bills. One of the largest contributors to adverse affects on human health is plastic that has been improperly disposed of. However, a new plastic substitute that causes no damage to the environment has been introduced into the public market. This breakthrough in technology, if implemented appropriately, will protect future human health, animal health, and the environment from further degradation by plastics.

In modern society we have a proper method for disposal of everything we use. The Environmental Protection Agency, or  EPA, states on their website that “it is important to understand the capabilities and limitations of different waste management options for the various types of wastes generated in order to make cost effective waste management decisions that are protective of human health and the environment”. When waste isn’t disposed of properly the cost of reparations for damages can be much greater than the cost of preventing those damages. The costs for treatment of damages to people, animals, and the environment is typically much greater than the cost of preventing these harmful wastes for liable companies, parties, organizations, or individuals. In order to avoid excessive costs from damages to human health or the health of their local ecology, it is essential that waste is disposed of properly so more money doesn’t need to be spent repairing the damages done. Furthermore, proper waste disposal creates revenue for Boulder‘s local government.  This revenue is created by the local government by reselling the recycled materials created in the recycling processes.  By increasing the amount that is recycled, the local government’s budget is also increased. 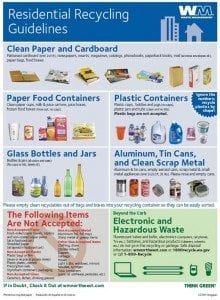 Eighty percent of trash that reaches the seas originates from landfills and other urban sources according to seeturtles.org. Even though we consider a landfill the end site for waste, it is infiltrating into other areas. Some of the most deadly waste that is reaching the ocean is in the form of plastic bags. Plastic bags are made out of petroleum and are not biodegradable. Sea turtles and Jellyfish mistake petroleum based plastic goods for food. When these species eat plastic it often causes suffocation or disruption to the digestive system, killing the animal. Plastic toxins also accumulate in fish that end up being eaten by people. These toxins are endocrine disruptors and damage the reproductive tissue in a person as well as adversely affecting the development of offspring. Americans use more than 380 million plastic bags and wraps each year, and less than five percent of plastics are recycled worldwide. These plastics play a huge part in the adverse affects of pollution on the environment and human health.

These disrupting chemicals can prevent natural development of an organism, especially that of developing fetuses. If a mother has strong bioaccumulation of these types of these endocrine disruptors, retardation of the developing fetus’s growth in its reproductive and nervous systems can occur. This can leave the fetus not only incompletely developed, but also impotent. If the reach of these endocrine disruptors into human society became strong enough, it is possible that future generations of humans could become infertile. One of the primary sources of this endocrine disruptor that could potentially make future generations impotent through common improper disposal is the birth control pill. When these birth control pills are flushed down the toilet and reach our water systems, the contraceptive pills’ detrimental effects on the developmental and reproductive systems of wildlife can spread through the water system that they were first introduced into other bodies of water.

Proper use of the recycling system here in Boulder not only generates revenue for the city but also protects our environments, especially water systems, from accumulating endocrine disruptors that have undesirable affects on the endocrine systems of humans and other animals alike. There are other varieties of chemicals that come from improper waste disposal that some scientists have proposed to also have adverse affects on the developmental and reproductive systems in fish and wildlife. If too much wildlife is exposed so these various chemicals, the populations of these species could be in grave danger. 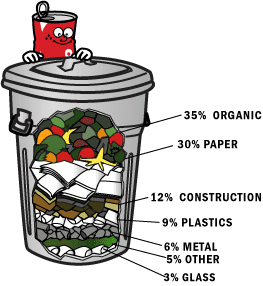 Wastes introduced into an environment have different impacts based on the ecology of that environment, but the type of waste is a greater factor. One of the worst improper ways of disposal is burning trash. Not only when trash goes to landfills is the trash burned before it is buried, allowing for the hazardous chemicals produced during the burning process to penetrate into our water tables, but when people burn trash in their yards to save time and effort they are releasing these toxic chemicals directly into the air that we breathe. The EPA’s website on waste management says that the pollutants created by burning trash include endocrine disruptors from plastics, dioxins, hydrocarbons, volatile organic compounds, carbon monoxide, ash, and other various carcinogens. These hazardous materials can cause irritation in the eyes, nose, and throat, and lungs.

So why aren’t people properly disposing their waste and recycling? Often it is due to a lack of knowledge of the benefits of recycling and protecting environmental health. , We are fortunate enough in Boulder County that the community supports recycling and reducing waste. When communities do not have such effective municipal utilities facilities like we have in Boulder, recycling does not bring revenue to the community and offers little incentive to the individual. Even with less of an incentive to recycle for other regions, there are still benefits for proper waste management in these areas according to the EPA.

Reusing waste preserves the original item, saves resources, and saves space in landfills. Construction and demolition materials, soil, mud, sand, electronics, vehicles, and building contents can all be appropriately reused. Recycling waste may generate revenue by selling the parent material, produces new usable products, saves energy and resources, and reduces space used in landfills. Composting is using organic material that would be waste to create fertilizer. This is an extremely cost effective way of producing homemade fertilizer. Fertilizer requires phosphorus, which is a nonrenewable resource because there is a finite amount of it on our planet. As phosphorus becomes scarcer, the price of fertilizer will continue to rise. By producing fertilizer not only can someone who is growing their own crops save an increasing amount of money every year, but can also potentially sell the fertilizer back to the community. Furthermore, by using controlled biological processes to break down organic waste, pathogens that could be being harbored in the waste will not spread through the environment, but instead be broken down. Composting also reduces the amount of waste going to landfills.

Increasing the amount of waste properly disposed of will reduce the reach of adverse impacts from landfill runoff, incineration, open burial and hazardous materials like endocrine disruptors. Furthermore, a new advancement in plastic technology has the potential to eventually reduce future impacts from plastics and endocrine disruptors to virtually nothing. According to the American Chemistry Society, new types of edible wrappers that have been invented dissolves in five seconds in your mouth, or five to ten minutes in warm water as opposed to the five to ten years that it takes for a plastic wrapper to dissolve in a landfill.

While the petroleum based bags and wrappers in the landfill dissolve into hazardous chemicals that reach our water tables, the edible wrappers created by Monosol and WikiCell Designs successfully mimic the properties of petroleum products without the toxic bi-products that are created when they are broken down. Already, Monosol is creating containers for staples in our society. On fastcompany.com, Monosol has released that they already have packaging for coffee, hot chocolate, spice strips, drink sticks, and oatmeal. Monosol is also currently working on the environmentally friendly packaging for military meals, water-purification film, frozen Lasagna, and laundry-detergent pods. If these forms of environmentally friendly packaging continue to grow in capability, a decrease in the damages from plastics will be imminent. Unfortunately, society will still have to face the consequences of prior improper plastic and endocrine disruptor waste management, such as the Great Pacific Garbage Patch. 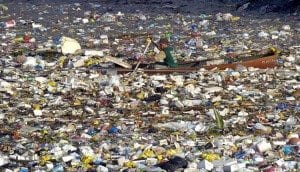 Even though in the near future Boulder County might not be using hazardous plastics for packaging, there will still be residual hazardous materials from the past that will require proper disposal.  This is something that all communities going through this transition will have to face. Learning how to dispose of each type of waste properly can help to avoid threats to human health, animals, as well as the environment. Although there have been many adverse impacts from plastic pollution, we are finally transitioning to an environmentally friendly substitute.  You can help and show your support by raising awareness, but the best way to get people involved is to become involved yourself.  Support products with environmentally friendly packaging.  Recycle, reuse, and lead by example. 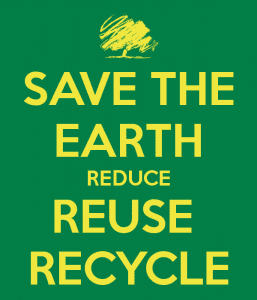