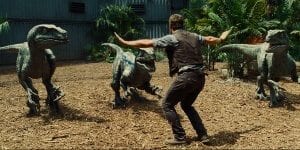 I remember seeing Jurassic Park in 1993. As a callow young punk, my father and I saw it at the dearly departed Village 4 theater in Boulder. I remember gasps from the audience at that first view of the Brachiosaurus.  I remember yelps of terror during the kitchen scene with the velociraptors. But the scene I remember most is the scene everybody remembers most. The T-Rex attack. The sound of the impact tremors. The sound waves rippling through water. The feeling of primal, escalating dread.

Since then, Jurassic Park has become a landmark in blockbuster cinema. Pretty much everyone has had that film imprinted on them, and they’ve had their emotions played masterfully by Steven Spielberg. A movie like that, deservedly or not, casts a long shadow. It spawned Jurassic Park: The Lost World, a film with a number of dynamite set pieces, but a film where raptors are defeated by the power of gymnastics. It spawned Jurassic Park III, which had a number of shrill and annoying characters, as well as a Spinosaurus. You take the good with the bad.

For years, a fourth film was teased*. Now, we have Jurassic World. Isla Nublar, the island from the first film, now houses a fully functional theme park. 20,000 visitors per day are no big deal. There’s long lines, $7 soda, and dinosaurs have become boring. Yes, there’s a scene where a character has his face in a smartphone, ignoring a marvel of genetic engineering right behind him. Claire (Bryce Dallas Howard) is the park’s operations manager, and it’s her job to make sure that things keep humming along smoothly. The park is run by billionaire Masrani (Irrfan Khan), who, with the help of Dr. Henry Wu (B.D. Wong-the only cast member to return from the original), has designed the fearsome Indominus Rex. It’s a new species of dinosaur, bigger, fiercer and crazier, and it was created in order to show the guests something new.

Thrown into the mix are Claire’s nephews Zach (Nick Robinson) and Gray (Ty Simpkins). Since Claire is a busy corporate type, she naturally neglects the boys, giving them a chance to get up to shenanigans. Also, being a busy corporate type, she’s too busy for love. Good thing force of nature and all-around he-man Owen (Chris Pratt) is around for her to fall in love with**. Owen is the park’s resident dino behaviorist and raptor whisperer. He’s brought in to evaluate the Indominus. You will be shocked, shocked, to hear that things go horribly wrong. The Indominus escapes and gleefully goes on a killing spree. He’s a very considerate murderer, as he enables other dinos to escape their enclosures and wreak havoc as well.

Spielberg only produces this time around. Direction is handled by Colin Trevorrow, previously known for the time travel comedy Safety Not Guaranteed. Initially, Trevorrow is making a blockbuster that’s a critique of blockbusters. There’s some good gags about our appetite for always wanting the next mind-blowing thing. That’s great, but as time goes on, Jurassic World turns into the thing that they’re making fun of. The CGI is decent, and there’s some pretty great dino-on-dino and dino-on-human***carnage. But there’s no sense of awe, no majesty, no love of dinosaurs. Trevorrow is fine, but fine isn’t good enough.

It doesn’t help that the screenplay, credited to 4 writers, repeatedly veers into the idiotic. Remember how the first film stressed that the dinosaurs were ultimately animals, and portrayed them as such? Not the case here. The Indominus Rex appears when convenient, kills indiscriminately and is hilariously superintelligent. Claire’s nephews also carry a subplot about how their parents are getting divorced. Do we get to know their parents? No. So why do we care? There’s a lot of that. Lazy plotting. Characters we struggle to give a damn about.

Chris Pratt, the man with weaponized charisma, plays a character that is literally flawless. He’s always right about everything, he’s utterly competent, and there’s never a sense that he’s in a situation he can’t handle. I like Pratt, and loved his flawed and funny Star-Lord in Guardians of the Galaxy. But his role here is one that easily a dozen other guys could have played. Same goes for Bryce Dallas Howard’s Claire. The writers deserve to be horsewhipped for giving her such a two-dimensional character. She plays her role a little flat, but overall she’s not bad.

My kid has been begging me to take him to Jurassic World. Obviously I will, since viewing wholesale slaughter is a critical piece of his development as an American. He’s seen the other movies. He’ll love this one. But here’s the thing. During the first film, when the T-Rex was introduced in a flourish of thunder and lightning, my kid sat bolt upright. With a big grin on his face, he said, “Oh, yeah.” That was wonder, something primal. He’s not going to find much of that in Jurassic World.

*Independent filmmaker John Sayles and screenwriter William Monahan wrote a draft of Jurassic Park 4 years ago. It concerned a soldier of fortune training a squad of genetically modified dinosaur hybrids to act as a Special Forces team. Guys, we very nearly had a movie where hyperintelligent dinosaurs were fighting a drug cartel. To paraphrase Candide, we are clearly not living in the best of all possible worlds.

**Claire needs a man to teach her about What Really Matters In Life? Seriously, guys? Did you not get the memo that we’re in 2015?

***There’s one particular death that comes off as incredibly mean-spirited. In movies like this, characters we’re introduced to usually get slaughtered a) horribly because they’re evil or b) in a moment of heroism. But the character I’m thinking of goes down hard, for no good reason. You’ll know it when you see it.

Tim Brennan
Tim has been alarmingly enthusiastic about movies ever since childhood. He grew up in Boulder and, foolishly, left Colorado to study Communications in Washington State. Making matters worse, he moved to Connecticut after meeting his too-good-for-him wife. Drawn by the Rockies and a mild climate, he triumphantly returned and settled down back in Boulder County. He's written numerous screenplays, loves hiking, and embarrassed himself in front of Samuel L. Jackson. True story.
See More Articles From Tim Brennan
Tagged: bryce dallas howardchris prattcolin trevorrowjurassic worldsteven spielberg
Boulder Colorado Air Quality