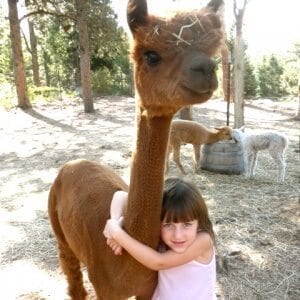 Zparkler sharing her sparkle with a young female friend (via Rittinger)

Some would argue life is what we make it; that it’s not about what happens to us, but what we do about it. Others would say it is in the “doing” that we lose ourselves completely. Bette Rittinger, Boulder County resident and owner of the Double B R Ranch, emanates the dance of these two lifestyles, by letting life guide the way and then knowing when to run with it.

Fifteen years ago, in the midst of her daily duties, Rittinger noticed a trailer drive by advertising alpacas, prompting a curiosity that wound up re-directing her life. Having little knowledge of the species, she inquired on the internet and researched local Colorado ranches, walking away impressed by the supportive community and the alpaca raising process. Soon after, Rittinger began breeding and re-breeding, eventually opening an alpaca store in Nederland. She reflects humorously, “Before I knew it, I had thirty!” She traveled to Peru for fashion shows, won several ribbons and gained outstanding credentials with knowledge of the alpaca business. She dove into all aspects of this species, who are “so gentle and so calming” (Rittinger). She claims that “they’re almost spiritual…they are spiritual.” Stepping back, Rittinger’s goal now is to welcome folk into the community in the same way she was welcomed fifteen years ago.

One of Rittinger’s draws to Boulder was her agreement with our environmental consciousness. In her love for the land, she sought a way to use it beneficially, using humane practice. Then the truck drove by that changed her life. Zparkler, Rittinger’s most renowned alpaca, is the spokesperson of this alpaca family. The face of The Carousel of Happiness in Nederland, she is always smiles and dazzling in personality. She’s had her own website, where kids wrote in questions in search of Zparkler’s wisdom and represents the magic that comes from human-animal interaction; the same magic that connects Rittinger to the Universe.

Boulder is so bold, so brave, so beautiful. It is home to people like Bette Rittinger who offer their home space to any friendly face who is willing to see something new or try something different. Bette Rittinger is where stories happen and where memories are made. Her home is everything she stands for and it’s worth seeing in person. Her home is the home we should all strive to have, humbled by memories, accomplishments and great loves. It is not just a home for her, but for all of us. Head on over to the Double B R Ranch to experience the embodiment of its bravery, boldness and beauty.