The Buzz About Boulder B-cycle 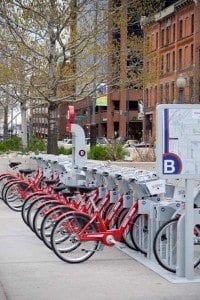 If you’ve spent much time in Boulder then it’s likely that you’ve noticed these spiffy red bicycles. They can be seen coasting along the Boulder Creek Path, under commuters as they zip to work, or parked at the many docking stations throughout the city. With their bright coloring, sturdy Trek frames, and big baskets in front, these trendy new bikes, or B-cycles, have become a popular and convenient new mode of transportation for many living in or visiting Boulder.

Boulder B-cycle operates under a technologically advanced, yet easy to use system of bike “sharing” as opposed to bike renting. Bike sharing programs have been popping up in cities all across the country recently, but the concept of large-scale bike sharing in the United States actually originated right here in colorful Colorado. The environmentally friendly Denver B-cycle program was launched, fittingly, on Earth Day (April 22nd) in 2010. The Boulder program emerged soon after, making it one of the original, and most influential and innovative bike sharing systems in the country.

To start riding, the first thing one has to do is go online and purchase a pass. The passes are far less expensive than any bike rentals, and riders can choose between a day, a week, or a full year membership. Once the pass has been purchased, riders can use any B-cycle and ride it for sixty minutes or less before returning it to any of the 22 solar-powered docking stations throughout Boulder. Each bike has a QR code by the handlebars, which, when scanned with a smartphone, gives riders a free app that shows the locations of all the nearest docking stations. After riders have returned their bikes to a station, they can immediately take a bike out and go for another hour-long ride for no additional price. The system is cheap, hassle-free, and perfect for those who wish to make one-way trips or connect to public transit. 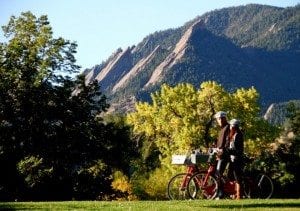 While bike-sharing programs in other large cities received start-up funding through federal grants and corporate sponsorships, Boulder B-cycle was launched through a grassroots, community effort. With the support of some very generous individuals and local businesses, as well as help from the City of Boulder, Boulder B-cycle was able to become the successful, growing program that it is today.

As a true, integral part of the community, Boulder B-cycle has also helped give back in a number of ways. In the aftermath of the recent floods in Boulder, the non-profit company stepped forward to support the city’s recovery. They introduced a new green bike, “Olive,” and pledged to donate $5 to the Foothills United Way Flood Relief Fund for each ride taken on the bike for the month of October.

They’ve also aligned with Boulder businesses, including local condom company, Sir Richard’s. Through their partnership with the condom company, Boulder B-cycle has decked out their entire fleet of bicycles with sponsored safety messages. Slogans include: “Wear a helmet and a condom, but not at the same time,” “If you climb in the saddle, be ready for the ride,” and “Try one on, just not in the store.” 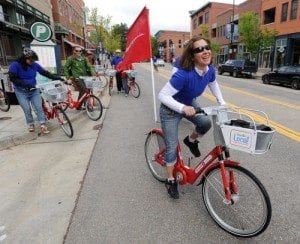 To find out some more information about the program, I recently spoke over the phone with Kevin Bell, the Marketing and Communications Manager for Boulder B-cycle. I asked him what it was about Boulder in particular that made it such an ideal place for bike sharing. He informed me that, “Boulder has one of the highest rates of bicycle commuting of anywhere in the country; it’s a very bike friendly place and it has an infrastructure made for bikes.” He then added, “It also doesn’t hurt that there are 300 days of sunshine a year. Boulder B-cycle was one of the first bike sharing places to stay open all year long.”

I asked him what goals he had for the company and he explained: “The bike sharing practice started here and that gives us the impetus to be as innovative as possible. We want Boulder B-cycle to be one of the most innovative bike sharing programs in the United States.” He added, “We’d like to expand our service area to reach as many residents as possible, but also to try new things and experiment with all types of new methods for bike sharing.”

When asked if there was anything else he wanted people to know about the program he said, “Especially for people who aren’t familiar with bike sharing, at first it can be confusing. But as long as people know that we are behind them with great, dependable service, there’s no need to worry. Just hop on a bike and have fun.”