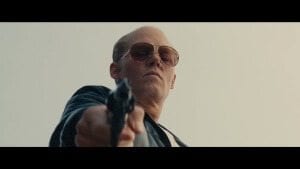 Pretty much every gangster movie ever made features those tropes. It’s a standard and immediately recognizable cliche. That’s okay, though, because often times cliches are just a way to recognize patterns in behavior. To a degree, we’re all cliches. But the great gangster films embrace aspects of those cliches, rise above them, and have a larger point to make.

It’s all based on the true story of James “Whitey” Bulger, a fearsome crime boss that ran the Boston underworld for years. He committed a breathtaking string of crimes, such as flooding the streets of South Boston with drugs and the killing of 19 people. Black Mass somewhat examines his rise and fall. It’s handled by flashbacks, articulated through the interrogation of key members of Whitey’s gang.

We’re introduced to Whitey (Johnny Depp), involved in a turf war with the Mafia. He acts with impunity, due to the protection of two powerful men. His brother William “Billy” Bulger (Benedict Cumberbatch) is a state senator who excuses Whitey’s behavior by saying, “Whitey is Whitey.” There’s also FBI Agent James Connolly (Joel Edgerton), who grew up in Southie idolizing Whitey. Since Bulger looked after Connolly when they were kids, Connolly wants to repay him in kind. He devises a plan where Whitey will act as an FBI informant. Whitey will rat out the Mafia, Connolly will bust them and look great for his bosses Maguire (Kevin Bacon) and Fitzpatrick (Adam Scott). Whitey receives a kind of immunity where he can continue running his gang, but he just can’t kill anyone. He must not have gotten the memo, since Bulger proceeds to kill the hell out of a lot of people. Meanwhile, Connolly must desperately cover for him and try to keep the whole house of cards from coming down.

Understand that Black Mass isn’t a bad movie. It’s very handsome looking, and it features a murderer’s row of great actors having varying degrees of success with their Bostonian accents.* But it’s not great, it’s just…fine. It doesn’t have the relentless thrumming energy or operatic soar of other great movies about crime.

Our pal Johnny Depp is the main attraction here. If you’re in the mood to feel profound disappointment, head on over to the IMDB and take a look at Depp’s filmography. Once an actor who was fearless and unpredictable, he made films like Ed Wood, Donnie Brasco, What’s Eating Gilbert Grape, and Fear and Loathing in Las Vegas. They weren’t all profitable, but dammit, they were interesting. In 2003, he made the worst possible decision by playing Captain Jack Sparrow in Pirates of the Caribbean: The Curse of the Black Pearl. As much as that film was a fun romp, it encouraged Depp to substitute acting for a psychedelic dress-up party.** For years, the appearance of Depp in a movie was irritating at best.

Here, he’s still basing his performance somewhat around costuming and makeup, but at long last, he’s playing a somewhat recognizable human being. His Whitey has bad teeth, corpse-white skin and a receding hairline. He looks like something out of a horror movie, but he tries to balance out the snarling with fleeting moments of tenderness. There’s a sequence where Whitey’s young son is diagnosed with Reye’s Syndrome after a severe reaction to aspirin. Whitey is in the hospital with his girlfriend Lindsey (Dakota Johnson). Both parents are panic-stricken, and Bulger realizes he’s dealing with an opponent he can’t threaten or bribe. It’s a nice moment of vulnerability, but the movie needs more opportunities to get us inside of Bulger’s head. What’s driving him? Money? Respect? Insecurity? We have no idea, and the movie won’t tell us. But at least Depp is trying for something.

Depp’s opposite number is Joel Edgerton, a fine actor that’s left at sea with an unconvincing role. As Connolly, he runs a line of B.S. towards his superiors that’s wildly unconvincing. We can sense nobody believes him, so why do they let him continue supporting Whitey? Plus, Connolly doesn’t feel fully fleshed out. He’s corrupt, he gets in too deep, and that’s it. Did he ever feel conflicted about what he was doing? Did he want out? I have no idea if the real Connolly ever had misgivings, but the film needs to show us other sides of his personality, and that never happens.

The supporting cast does generally good work, even if they’re not given much in the way of character. Jesse Plemons, who played a baby-faced killer on Breaking Bad, mostly stands around and looks uncomfortable as Kevin Weeks, a member of Whitey’s crew. The real Weeks was Whitey’s protege, and it would have been nice to have seen some of that dynamic. As usual, pros like Kevin Bacon and Corey Stoll acquit themselves well. And despite Cumberbatch’s nightmarish accent, he and Depp share some nice chemistry.

The screenplay by Mark Mallouk and Jez Butterworth doesn’t do anybody any favors. Again, it’s not bad, it’s just a highlight reel of Bulger’s greatest hits. There’s only a few times where the story slows down enough to breathe and feel organic.

Scott Cooper, who also directed Crazy Heart and Out of the Furnace, has directed a movie that should be a winner. He even shot some scenes on location where Bulger committed murders, but the dark juju never transfers over to his movie. The movie needs to feel energetic and Shakespearean, like The Departed or Mystic River, instead of dry and removed. Also, those two films went above and beyond showing how Southie feels as a place and as a community. There’s none of that in Black Mass, and it could have taken place in any major city.***

Yeah, you should probably see Black Mass. Just know that it’s frustratingly half-assed, and it should have been able to harness the weird charisma of Whitey Bulger. His story is so odd, grand and compelling. With a subject like that, someone is going to eventually get it right.

*The main offender is Cumberbatch, who transforms his natural English lilt into a weird hodgepodge of JFK by way of Joe Pesci. It’s awful, but not the worst Boston accent committed to film. That would be Jeff Bridges in Blown Away, who commits linguistic atrocities with his “Pahk the cah in Hahvahd Yahd” patois. That film also features Tommy Lee Jones as a cackling Irish terrorist, which is…inspired casting.

**Tim Burton didn’t do him any favors either. Burton, for the most part, isn’t interested in telling stories. He’s more into images and sequences. That’s proven by his filmography, since he’s credited with directing 30 films, and only about 7 of them are any good.

***Which reminds me, when is someone going to make a solid crime film set in Denver? Somebody get on that.

Tim Brennan
Tim has been alarmingly enthusiastic about movies ever since childhood. He grew up in Boulder and, foolishly, left Colorado to study Communications in Washington State. Making matters worse, he moved to Connecticut after meeting his too-good-for-him wife. Drawn by the Rockies and a mild climate, he triumphantly returned and settled down back in Boulder County. He's written numerous screenplays, loves hiking, and embarrassed himself in front of Samuel L. Jackson. True story.
See More Articles From Tim Brennan
Tagged: benedict cumberbatchblack masscorey stolldakota johnsonjoel edgertonjohnny deppkevin baconscott cooper
Boulder Colorado Air Quality