Home › Blog › Boulder People and Events › The Stories Behind the Stuffs

The Stories Behind the Stuffs 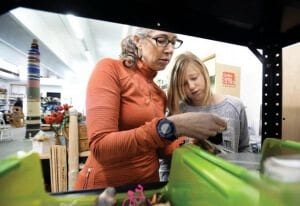 Art is usually classified as the end result of some creation, innovation, or production of something constructed from nothing. ArtParts Creative Reuse Center, a newly operating nonprofit in Boulder, located just off 28th street, is brilliant in the way it harbors the possibility of art before it is made. Using 100% donation based products, ArtParts is a home of ideas waiting to be thought of, an opportunity for sparks to fly and light bulbs to go off at the sight of a textile; this store is full of game changers, heaven to any type of artist, dreamer, engineer, assembler, student, crafter, innovator, or scientist seeking a product, or a part of a product they just cannot find anywhere else. Expect for the next up-and-coming Boulder boom to have started with an inspired idea from ArtParts Creative Reuse Center, for it is the bare bones of beauty; enrouaging a higher level of consciousness in the way materials are mentally and physically reused and redirected.

While its products fall somewhere in-between a vintage shop and a thrift store, somehow it exceeds both of those in one. Denise Perreault, textile artist, bead and art restorer, and nonprofit founder embodies the magic that is this concept. She advocates strongly that this store’s purpose is one of community benefit, and that she’s “just the person who helped make it happen” (Perrault). Established in 2011 and operating for only six months, ArtParts Creative Reuse Center has diverted over one ton per month from their landfill since opening in May 9, 2015. With the intention of merging with the local Zero Waste project, Perreault believes that “cannot happen without a reuse center.”

The store is organized by textiles from woods, to metals, to aluminum, where everything we would traditionally define, is classified solely by its material. For example, a button, a bike gear, or a bangle jewelry bracelet is found by the “metals,” speaking volumes to the influence of a concept. Who’s to say a bracelet must be worn? Perhaps its material proves worthier than its function. One of the racks was humbly labeled, “Good Beads, Bad Jewelry,” encouraging the consumer to look at the parts over the entire product. 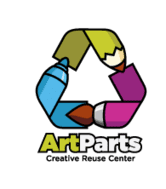 Perreault believes that the beauty exists in the details, and states, “We want to encourage people to look at that mundane stuff beyond its original meaning.” The center is not just a store, but an experience. Perreault and her team encourage buyers to post pictures of the final products they made on their facebook page, disclosing, “That’s part of the deal, to include the stories in their stuff; stuff is absolutely fascinating. It imbues [itself] with a meaning it otherwise wouldn’t have.” Perreault began discussing the Japanese idea of Shinto, claiming that usable items that are thrown away weep in the trash, challening each individual to decipher what can be used again, perhaps in its parts if not in entirety.

Perreault is not alone when she expresses that “all of our lives are enriched with art materials,” and that “we can never be surrounded by too much beauty.” In looking at each and every thing as more than its function, but the parts of its construction, she, and this center, are changing the world with this concept. While ArtParts is the 63rd reuse center in the country, it is the third in Colorado, influencing our products, people and planet (Perreault).

Every consumer becomes a story-teller at this reuse center; it is the adult toy-store for mixed media phenoms and it is incredible. A first-time consumer, Dean, walks out with a greater understanding of one person’s trash being another’s treasure, and perhaps we can all do better about expanding the definition of both, “trash,” and “treasure.” Sometimes we need a little boost to re-examine the principles we’ve always known. ArtParts Creative Reuse Center radiates a mutual benefit for the environment and the people in it by using a new language to create a new lifestyle. This is an emporium for all possibilities. Attention: art galleries are out; art parts are in.

Be sure to check out the store at 2870 Bluff Street, across from the Rally Sports Fitness Center.