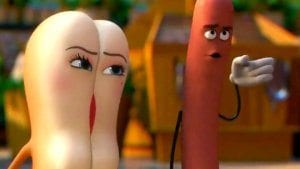 First, a warning: If you’re the parent of young children, and you consider packing them into the family truckster to see the new animated film Sausage Party, purely based on the fact that it’s animated…don’t. As a parent, your job is to check out any media your kids consume before they consume it. Animation is not strictly for kids. Do your damn job.

Next, a quick anecdote: A good friend of mine worked for a major airline for many years. During a company gathering, it was decided that the employees would get a kick out of a screening of the comedy Airplane. As it turned out, many members of the audience did not, in fact, get a kick out of it. There was a sea of scowling faces, and there were complaints that the film was racist and sexist. Offense was taken. All over a ridiculous comedy from 1980.

So does this mean that we live in a society that’s overly politically correct and that we collectively need to lighten up? Yes and no. On the one hand, today’s world is one in which we too often jump to conclusions based on surface level information. If we hear a slur or an off-color joke, too many of us don’t take the time to think about the motive behind the joke, or what it’s trying to say. I have no doubt that if Blazing Saddles, a brilliant movie that’s supremely anti-racist, were released today, Twitter would explode in rage, and we would be inundated by countless thinkpieces about how “problematic” the film is.

On the other hand, it’s easy, sickeningly easy, for a straight white guy to tell others to lighten up. As a straight white guy, I’m well aware that I live my life in a protective bubble of privilege. I don’t have to worry about being shot by some jittery cop, or endure endless catcalls and unwanted advances, or be barred from marrying who I love because some knucklehead misinterprets an ancient religious text. What I do have to pay attention to is the fact that my words and actions matter, and I’d better be ready to back them up with decency. In other words, I need to not act like a dick. That’s one of the main themes of Sausage Party, and it’s impressive that a movie filled with wall-to-wall filth can make time to also throw out solid philosophical points.

In an interview, Seth Rogen said, “People like to project their emotions onto the things around them: their toys, their cars, their pets. So we thought: what would it be like if our food had feelings? We very quickly realized that it would be f***ed up.” He’s not wrong. Rogen plays Frank, a hot dog living in a package in a supermarket. All of the food is alive, they all think and feel…and sing. They begin each day with a catchy tune, praising the Gods who shop there. Their ultimate goal is to be chosen by the Gods and to be taken out into The Great Beyond, where they’ll live forever in perfect happiness.

Next to Frank is a bag of hot dog buns, one of whom is his girlfriend Brenda (Kristen Wiig). They’re in love, and they desperately want to consummate their relationship, but they’re trying to be good to make the Gods happy. But when Honey Mustard (the great Danny McBride) is returned to the store, he brings a nightmarish message. The Gods don’t care about saving their souls. In fact, the Gods just want to devour them. Everything they believed is wrong, and the world is a dark and empty place.

When a God chooses Frank and Brenda’s packages, they become separated. So begins a quest for them to reunite and discover the truth. They meet Sammy Bagel Jr. (Edward Norton, channeling Woody Allen), who bickers constantly with Lavash (David Krumholtz). Teresa, a lesbian taco shell, joins them, and the group must avoid Douche (Nick Kroll), who blames them for wrecking his life.*

Sausage Party is like a Pixar movie on acid. Someone, somewhere, will be foolish enough to take their kids. Within five minutes, once the relentless onslaught of profanity begins, they’ll learn that they made a grave mistake. The sheer amount of f-bombs dropped alone means that the film could easily compete with Goodfellas or The Big Lebowski. Not only that, but there’s a dizzying array of what charmingly used to be called “ethnic jokes.” You’ll see a jive-talking box of grits, a foppish Twinkie, and a native-American themed bottle of whiskey named Firewater. At times, it even became a bit much for me. When the Fascist sauerkraut sang about the extermination of the juice, I said out loud in disbelief, “Really? You actually went there?”

Yeah, the film hammers you with gags and never lets up. Most of them are at least somewhat offensive, but for variety, there’s also goofy dad jokes and exceptionally painful puns. It’s not surprising, considering the murderer’s row of talent on display. Just a few of the standout comedy assassins are Craig Robinson, Bill Hader, Paul Rudd, Michael Cera, James Franco, and Jonah Hill. You may not be able to recognize them all, but they’re all working their hardest to make you laugh. God forgive me, I laughed a lot.

But look beyond the blizzard of filth and objectionable jokes, and you’ll see the filmmakers have something to say. We have here a silly looking cartoon that claims the Supreme Beings are awful monsters, the afterlife is a lie, we suppress our base instincts and live in misery due to religion, and we squabble over irrelevant details. But the film isn’t a tiresome anti-religion screed, and in fact, a major plot point involves the idea that people don’t want to be preached at. Rather, they want their better natures to be appealed to.

Let’s also take a moment to talk about the film’s use of ethnic stereotypes. While I’ll admit it’s a little lazy, they’re used as a metaphor for the human race. The supermarket is divided into aisles. Each aisle has its own belief system and culture, and Frank travels through all of them to try and spread the word and bring everyone together. While clearly immature, we’ve got a movie that celebrates differences, while also acknowledging that many of those differences are simply surface level. The foods share more similarities than differences, and their connections are wide and deep.

Directors Conrad Vernon and Greg Tiernan spent years making Thomas the Tank Engine cartoons. I have no idea how Seth Rogen and his co-writers managed to convince them to make this movie, but they made a film that’s like a hallucinatory version of VeggieTales. The human characters are grotesque, and there’s always a slight sense of wrongness about the cute food characters. I love that, it’s like a group of meth addicts broke into the Disney Animation studios in the dead of night and made this movie when nobody was looking. It feels subversive, dangerous, and in its own dumbass way, it’s trying to engage with you intellectually.

There will be those who avoid Sausage Party like the plague, or righteously rail against it. They’re going out of their way to miss the point. Rogen and Company have made a movie, like their brilliant film This Is The End, that has something on its mind. Comedy is subjective, but if a gag fest is interested in doing more than making us laugh, then it’s worth paying attention to.

*Yeah, we’re not exactly talking Oscar Wilde level quality of all the jokes.

Tim Brennan
Tim has been alarmingly enthusiastic about movies ever since childhood. He grew up in Boulder and, foolishly, left Colorado to study Communications in Washington State. Making matters worse, he moved to Connecticut after meeting his too-good-for-him wife. Drawn by the Rockies and a mild climate, he triumphantly returned and settled down back in Boulder County. He's written numerous screenplays, loves hiking, and embarrassed himself in front of Samuel L. Jackson. True story.
See More Articles From Tim Brennan
Tagged: bill haderconrad vernondavid krumholtzedward nortongreg tiernankristen wiignick krollsalma hayeksausage partyseth rogen
Boulder Colorado Air Quality