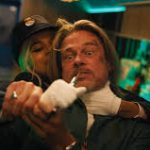 It’s been said that the era of the movie star is dead. I’m not sure I’d say it’s dead, per se, but it’s definitely in a medically induced coma. For example, take a look at the highest grossing films of 2022 thus far. A few of them are: Top Gun: Maverick Doctor Strange in the Multiverse of Madness Jurassic World: Dominion The Batman Minions: The Rise of Gru All of those films are intellectual property. All of them are part of a franchise, to some degree. With one exception, their success isn’t based on who the star is. Rather, their success is based on a filmgoer’s comfort level... Read More