Von Miller – The Pros and Cons 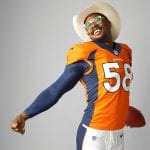 At the time, signing Von Miller to a six-year/$114 million contract seemed like a brilliant move.  It was July of 2016, and the 27-year-old Miller had already won a Super Bowl MVP award, twice made the All-Pro team, while racking up double-digit sacks every year, including 18.5 sacks back in 2012. After signing the long-term extension, Miller continued to be the face of the Broncos making eight Pro Bowls, forcing 26 fumbles, and eventually becoming Denver’s all-time sack leader with 106. But contracts are tricky, especially in the NFL.  After many years of Hall-of-Fame like production, Miller... Read More