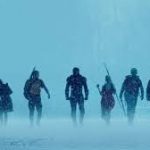 Once upon a time, there was a director who got royally screwed. His name was (and continues to be) David Ayer, and his upbringing in South Central Los Angeles informed him well. There are likely two reasons you’re familiar with Ayer. The first is his work as the talented screenwriter of Training Day and the director of very good films such as End of Watch and Fury. The second reason is that he’s the guy who made 2016’s Suicide Squad. Despite making nearly $750 million and winning the Academy Award for Best Makeup and Hairstyle, Suicide Squad was critically reviled. I read over my review*... Read More