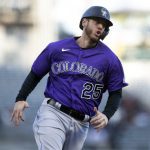 Stop me if you have heard this story before.  A young team with playoff potential trades their best player, fires their General Manager, fails to develop their pitching staff, and eventually ends up 32.5 games out of first place with a record of 74-87. Meanwhile, ownership cries about the woes of being in a small market environment, defends himself by stating that his team has the 11th highest payroll in the major leagues, and fans exit the gates as soon as “last call” is announced. It started with Matt Holliday leaving back in 2008, then Troy Tulowitzki in 2015. DJ LeMahieu left for a batting... Read More