Sports are Back! – Well, Almost 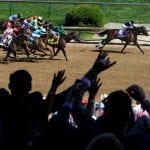 For a moment it was if sports were all the way back.  Large galleries followed golfers around Torrey Pines at the US Open, NBA playoff games were being played with crowds at full capacity, and UFC Fight Night was no longer at Fight Island off the coast of Dubai, but rather, Treasure Island off the Strip in Las Vegas. At the Kentucky Derby thousands of fans cheered on their horse in most elegant hats, and at the Tour de France thousands more lined cobblestone streets.  Boisterous fans clamored behind home plate at the College World Series, and tennis officials were once again asked to quiet fans... Read More