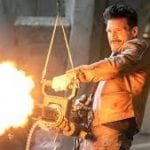 Boss Level is streaming on Hulu In the world of Hollywood, it can take time for a genre to emerge. That’s mostly due to the overwhelming cowardice lurking throughout the entertainment industry. If you have a novel idea for a movie, say, an action flick where the hero is scared and tired, or a series of films that create an interconnected cinematic universe, the vast number of executives will pass on it before you can finish your first sentence.  It took a minute for time loop movies to catch on. Groundhog Day wasn’t the first. As best as I can figure, the first time loop movie was The Girl... Read More