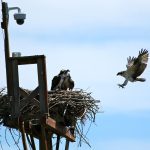 Boulder County Fairgrounds Osprey Camera Provided by: Parks & Open Space Foundation Fairgrounds Osprey This is one of several osprey nests in Boulder County. In the spring of 2003, this osprey pair began nesting on a light pole at the Boulder County Fairgrounds and returned each year. In 2009, wildlife biologists moved the nest to its current location just east of the Cattail pond for the birds’ safety. The pair shifted to the new location with ease. Our biologists believe that the local surge in nests may be offspring returning to their previous habitat area. In 2014 and 2015, a female osprey... Read More