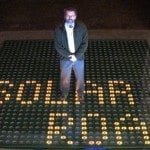 This was a weekend for celebrations: Memorial Day across America; the Bolder Boulder and Boulder Creekfest in Boulder; and — especially for co-founders Julie and Scott Brusaw in Idaho — a successful Indiegogo campaign for Solar Roadways. As of this writing, the campaign, which sought $1m in crowdfunding, has received $1.4m, with five more days to go before deadline. That’s big news with big implications. On paper, Solar Roadways could solve, well, most of our most seemingly unsolvable issues. According to the company’s estimates, replacing the current asphalt- and concrete-based... Read More