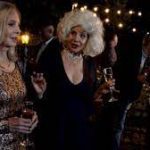 Independent film exists because studios exist. Show business, particularly these days, has an almost sociopathic focus on the “business” side. Due to the coming merger of streaming behemoths HBO Max and Discovery+, nearly completed films were shelved and declared to be tax write-offs. TV programs that were deemed to be not profitable enough were canceled and/or removed entirely from the streaming library. In the end, money rules all with the studios. No big surprise there, and the reason that Marvel Studios is the name in four-quadrant popular cinematic entertainment is that the movies make... Read More