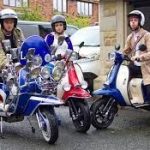 We all come of age, and one catalyst for that can be the death of a parent. Do we do that through closure? While I don’t believe in the concept of closure, a parent’s passing is a seismic event. Ideally, it’s an event that ought to be faced and considered in as healthy a manner as possible. Sometimes it’s not possible. My mother died when I was seven, and, for various reasons, her death became a thing that we generally didn’t talk about. As a result, “closure” never happened, and until fairly recently, her life was an almost completely closed book to me. Whether it was fair or right... Read More