Why Boulder is Truly the Best College Town in America 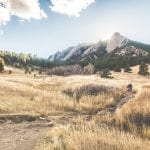 BestCollegeReviews recently put up a list of the fifty best college towns in America, and the number one slot was saved for none other than Boulder, Colorado. Boulder is no stranger to being included in these “best of” lists for college towns, either. Previously, Travel and Leisure put Boulder as the sixth best college town on their list. AIER also previously listed Boulder as the best small metro college city. Livability also gave Boulder the number one spot for the best college town back in 2013. Really, anyone living in Boulder knows just how great it is. In case anyone has forgotten,... Read More