When should I cover my Plants? Boulders first Frost 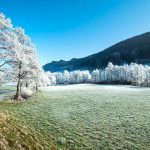 The nighttime temperatures in Boulder, Colorado start to drop as your growing season draws to a close, increasing the likelihood of frost with each passing day. Around September 18, you start to run the risk of experiencing frost, and by October 11, you almost certainly will have experienced at least one frost event. Frost is water vapor or gaseous water that solidifies. Frost typically forms on objects such as cars, windows, and plants that are exposed to moist air outside. Heavy frosts are common in fog-covered areas. When an outside surface cools below the dew point, frost forms.        Read More