Life Does Not Agree 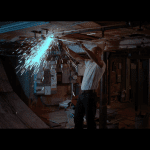 Most of the time in movies, people enter the criminal underworld because they’re evil. John Doe in Seven is a gimlet-eyed psychopath who kills people to satisfy a twisted moral code. While Neil McCauley in Heat isn’t a gibbering madman, he’s still evil, just more low-key about it. As much as he goes on about professionalism, he’ll still put innocents at risk in a gunfight. Hell, there are no shades of gray to the Russian gangsters who foolishly antagonize one John Wick. They’re straight-up Bad Guys, and we’re into it when Super Storm Keanu comes for them. Most of the time in life, people... Read More