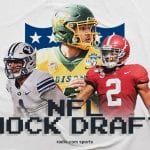 The NFL Draft is less than two weeks away and Denver has the ninth overall pick.  The off-season has been filled with the re-signing of big-name players and shoring up weaknesses with free agent acquisitions.  The Broncos could use their pick on a top linebacker, a shutdown cornerback, or depth at the offensive lineman position. And there is always that question at quarterback. A look at the 2021 NFL Draft, the predictions, and who Denver eventually decides on.   Jacksonville Jaguars – The first pick of the 2021 NFL Draft is a no-brainer. Gardner Minshew is a nice backup in the NFL, but... Read More