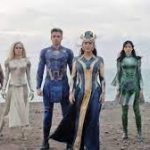 According to the official count by Marvel Studios and Disney, there are more than eight thousand characters in the Marvel Universe. This number doesn’t necessarily count supporting characters and one-offs. If it did, we’d be somewhere in the neighborhood of over seventy-two thousand. With numbers like that, it only makes sense that most characters will remain somewhat anonymous. The general public hasn’t the foggiest idea who Jack of Hearts or Dr. Druid happens to be. Not every Marvel character is destined to be an icon, and even when the best is in the business of creation, sometimes their... Read More