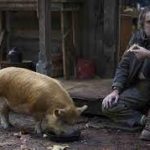 Is it fair to call Nicolas Cage a film icon? Not in the religious sense of the word, but more the idea that an icon represents a concept.  Take a look at his filmography for a moment. You’ll first notice a fairly astonishing amount of good to great films he’s made. Red Rock West. Leaving Las Vegas. Lord of War. The Rock. Mandy. If any other actor had done just one of those films, they’d be looked at as an all-timer. The other thing you’ll notice on said filmography? A titanic amount of crap. Some of it was due to simply picking the wrong projects. Some of it was due to fallout from a high-profile... Read More