Hoop – There It Is 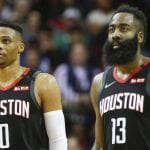 With the start of the 2020-21 season less than a month away, the NBA was in hustle-mode as it tried to make up for lost time.  On Wednesday of last week, the wait was finally over for many young hopefuls as the NBA draft took place, five months later than expected.  Days after, free agent frenzy came storming through as players jumped around the league looking for new homes and riches. It was a crazy week in which 22 of the 60 players drafted ended up being traded, Gordon Hayward rejected a one-year/$34 million player option with the Celtics, and Dwight Howard tweeted out that he was coming back... Read More