Basketball at The Olympics – The New Dream Team 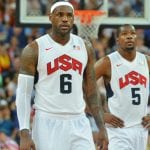 As Kevin Durant held the ball at the top of the key the entire arena knew what was coming.  Down by two points with just seconds left in a pivotal game seven, Durant went to work. A few dribbles, a spin, a step-back-three, and the crowd erupted. A storybook ending in which Durant single-handedly willed his team to victory by scoring 48 points, including the game-winner, advancing the Brooklyn Nets into the Eastern Conference Final. At least, that is how the story would have gone if it was not for Durant’s size 18 shoes. Instead, an official video review showed that Durant’s mammoth shoes barely... Read More