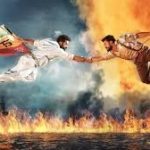 RRR is streaming on Netflix  It would not be an understatement to say that Indian cinema is a big deal. A little research teaches me that, on average, somewhere in the neighborhood of 1,800 films are produced in India annually. In 2019, before reliable reporting got blown up by the pandemic, the Indian film industry grossed about $2.7 billion, making it the third-highest in the world. Here’s the thing…if Indian cinema is such a cultural juggernaut, why haven’t I reviewed more Indian films? That’s because I screwed up! It’s not easy to strike a balance between American blockbusters and... Read More