Females, Firings, and Some COVID Relief 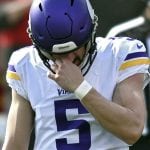 It was a strange sports week, to say the least.  In college football LSU upset sixth-ranked Florida despite being a 23-point underdog, USC came back in the final seconds to beat rival UCLA, and Sarah Fuller kicked two extra points suiting up for the Vanderbilt’s Men’s team. In the NFL, Drew Lock came into Sunday’s game with the worst quarterback ranking in the league and threw four touchdowns in Denver’s win, Carson Wentz was benched and might need to make himself comfortable, and luck is running out in Las Vegas. Meanwhile, Kevin Durant is back in the NBA with Brooklyn, Kyrie Irving refuses... Read More