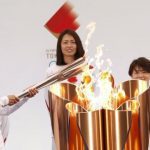 On July 23rd I sat glued to my television as the countries entered the arena.  Feeling a sense of patriotism, I smiled as the team representing The United States of America circled the stadium.  I vowed to watch every moment, cheer for all that is America, and stand for every victorious National Anthem played. But there was more than that. As the athletes continued to pour in, I cheered for the underdog of an athlete without a country.  The isolation of the few representatives from The Island of Tonga.  I watched that Olympic flame light up, and I promised myself to watch all 28 sports and... Read More