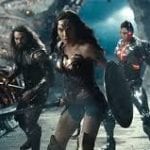 Zack Snyder’s Justice League is streaming on HBO Max Second chances don’t come around too often. That’s just as true in the movie business as it is anywhere else.* For filmmaker Zack Snyder, his 2017 film Justice League seemed to be firmly in the rearview mirror. Can you blame him? The Marvel Cinematic Universe had producer Kevin Feige coordinating everything. The MCU made money — lots of it. Warner Bros. very quickly realized that a) they owned the rights to the DC comics characters and b) they also loved money. In short order, they rushed to create the competing DC Extended Universe.... Read More