While she never lived in Boulder, Margaret “Molly” Brown benefited from the same incredible good fortune as Boulder itself due to the mining industry in Colorado. 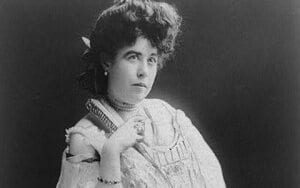 Molly grew up in Hannibal, Missouri, the daughter of poor Irish immigrants. From ages thirteen to eighteen, she worked in a tobacco factory to help support her family. The harsh working conditions there inspired her interest in reform and labor movements later in life.

Molly and her brother Daniel moved in Leadville, Colorado in 1886, where Molly went to work in a department store. There, she met and soon married mining engineer James Joseph “J.J.” Brown. J.J. was intelligent and hardworking, having developed a method of holding up the walls of a mine using hay bales, a strategy which allowed miners to dig deeper. But for all his good qualities, he was not the wealthy man Molly had originally dreamed of marrying.

However, that dream came true when J.J. discovered gold in the Little Johnny Mine. The owners, the Ibex Mining Company, rewarded J.J. an eighth of the the mine’s profits. This made the Browns millionaires virtually overnight and they moved to Denver shortly after.

Poverty worsened in the budding frontier city when the price of silver rapidly dropped in the area, galvanizing Molly to join the growing Progressive movement. She campaigned for more public baths and parks to improve the lives of the poor and even ran for the Senate in 1901, something was unheard of for a woman of the era. Molly also had a passion for travel, one which would lead her to become involved in one of the 20th century’s most famous disasters.

Molly and J.J. legally separated in 1909, but never divorced. J.J. gave her a substantial allowance that allowed her to continue to travel and pursue her volunteer work for the rest of her life. In 1912 when she was traveling through Europe, Molly received news that her son was ill. Wanting to return home as quickly as possible, she bought a First Class ticket on the doomed Titanic. Being a wealthy passenger, she was one of the first people to be allowed on a lifeboat. But when she realized her lifeboat did not even hold a third of the people it had the capacity to, she insisted that the crew return to rescue any survivors who might still be alive in the frigid North Atlantic waters after the ship sank. Later, Molly gathered money from the other First Class passengers to help the other survivors. Polly Pry, a Denver gossip columnist, dubbed her “the unsinkable Molly Brown” as a result and the “title” stuck.

Her role in the Titanic disaster captivated the nation and she used her new notoriety well. Molly helped mediate the conflict between miners and the Colorado Fuel and Iron Company, which was owned by John D. Rockefeller. She criticized the working conditions for the laborers, eventually leading to Rockefeller conceding to many of their demands. Molly also became involved in the National Women’s Trade Union League, an organization that advocated for a minimum wage and the implementation of an eight hour workday.

Today, Molly Brown is the subject of numerous books and films. Like many other famous historical figures from Colorado, her ghost appears at Historical Boulder’s Meet the Spirits tour every October.