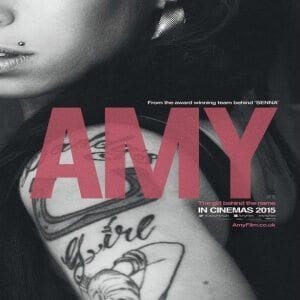 Addiction is a bitch. There’s a number of reasons why, genetic, emotional, psychological, the list goes on. For me, one of the cruelest aspects of addiction is the removal of potential. When we’re born, we’re blank slates. The possibility exists that we can go anywhere, do anything. But some of us have a self-destructive streak, and over time, that potential is transformed into a fire. It exists only to consume, and whatever the addiction happens to be, all that matters is feeding the fire.

Kapadia’s film is a mixture of home video footage and archival clips, accompanied by audio commentary from those who knew her best. We see her as a teenager, hanging out with her pals. They start singing Happy Birthday together, but her voice dominates, and it’s bizarre to hear a voice that belongs in a smoky jazz club coming out of a fresh-faced English girl. Even her friends can’t believe it.

An incredible singer reminiscent of the girl groups of the 1960’s, Winehouse exploded onto the scene in 2003 with her debut album, Frank. It was a mixture of funk and jazz-infused soul, and it introduced Winehouse’s persona of being simultaneously coquettish and sleazy. But it was her 2006 album, Back to Black, that cemented her legacy. Probably her best known song, Rehab, has these lyrics:

As a songwriter, she was brutally honest and nakedly open. Her lyrics, which are cleverly shown as on-screen captions, not only give us a more candid understanding of her, but lay out the themes of the film. We all know that cliche-the wildly talented performer succumbing to substance abuse. We saw it with Joplin, Hendrix, Belushi. Her death in 2011 of alcohol poisoning was tragic, but hardly surprising.

But the genius of Amy is in how she’s humanized. We meet a somewhat normal, working-class girl growing up in North London. Her parents went through a nasty split, and she craved approval from her father, Mitch. We see her grappling with bulimia, and her mother, Janis, airily dismisses it as a phase.

We see Amy falling in love with jazz and soul. Based on the film, I think she never really wanted to be famous, and that she would have been perfectly happy performing in small basement clubs. Her music was meant to be a counterpoint to overproduced pop music. But it spoke to a wider and vaster audience than she anticipated. Unfortunately, combined with her singing and songwriting talents were some lethal character traits. A passive-aggressive streak a mile wide. A voracious appetite for alcohol and drugs. An attraction to manipulative men.

Maybe with a good support system she would have been okay. We meet her childhood friend Juliette Ashby, a caring woman who tries to look out for Amy. There’s her first manager, Nick Shymansky, a genuinely good guy with an unrequited crush. There’s professional colleagues, like the rapper Yasiin Bey (also known as Mos Def), and producer Salaam Remi, people who valued her talent and looked forwards to creating art.

But the film shows us a fragile young woman surrounded by monsters eager to exploit her. Her father Mitch, who brings in reality show camera crews to invade her private moments and shrugs off her increasingly alarming addiction. Her husband Blake Fielder, who introduced her to cocaine and heroin, and wanted her to stay hooked so that he could control the meal ticket. Paparazzi eager to get a photo of her coming out of a club as a walking train wreck. Comedians and media personalities making cruel jokes at her expense.

Ultimately, Kapadia shows us a woman in a death spiral that was completely avoidable. She becomes a hot mess, goes into rehab, comes out and just starts the process all over again. It’s difficult to watch, and Amy doesn’t portray her as a martyr. She’s a profoundly tragic figure battling a nasty affliction, and Kapadia makes no excuses for her.

There’s a scene near the end of Amy where she’s recording a duet with Tony Bennett. He was one of her heroes, Amy idolized him. She’s initially having trouble, and you can see her beating herself up and the humiliation in her eyes. “Don’t worry, it always takes me a while to warm up, too,” Bennett tells her gently. Finally, she gets into the groove and, when her voice meshes with his, it’s transcendent. Despite the wasted and unrealized potential, we see in that moment that Amy was truly one of the greats.

Tim Brennan
Tim has been alarmingly enthusiastic about movies ever since childhood. He grew up in Boulder and, foolishly, left Colorado to study Communications in Washington State. Making matters worse, he moved to Connecticut after meeting his too-good-for-him wife. Drawn by the Rockies and a mild climate, he triumphantly returned and settled down back in Boulder County. He's written numerous screenplays, loves hiking, and embarrassed himself in front of Samuel L. Jackson. True story.
See More Articles From Tim Brennan
Tagged: amyamy winehouseasif kapadiablake fieldermitch winehouseTony Bennett
Boulder Colorado Air Quality