I remember the day in high school, all those years ago, when my German teacher, Frau Sussak, expressed to me the virtues of learning German. Like any student who somehow gets caught up in Deutsch, rather than a perhaps more functional language like Spanish, I started to question whether learning German was actually worth my time, being in, you know, America. Around my junior year, I decided to express these concerns to my teacher, a kindly woman who had been in the industry of teaching kids western Europe’s most distinctive (and perhaps, most made fun of) language for some thirty years. As if she had heard this song and dance before, Frau began into her speech about the value of a German language education. “Hans-Sebastian,” she began sweetly (Hans-Sebastian being the most-German name I could think of to call myself in the class), “when you become fluent in German, you’ll be able to converse with all the great architects, engineers, musicians, and thinkers from all over Europe!” I mean, I guess. Although (and this might sound a bit ethnocentric of me), I’m sure if I needed to communicate with the great thinkers of Europe, we could all get by with English. Or, if it was super important, we could hire a translator. 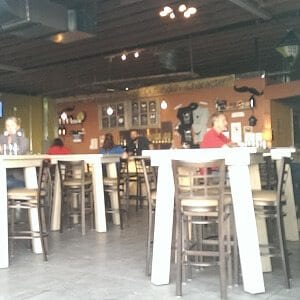 Well, you might have guessed, but I’m not an architect, engineer, musician, or that great of a thinker, so my knowledge of the German language has more-or-less sat dormant in my brain since I was seventeen. However, when I read the name of a new brewpub up in Longmont, the Groẞen Bart Brewery, I couldn’t help but contain my excitement. Not only was I using the German I had forgotten all those years ago, but the name spoke to me! What I mean to say is, “Groẞen Bart” (pronounced “growsen bart”) literally translates to “big beard.” As any bearded man will tell you,  beard culture is the best part about having a beard. Now, I realize that the name of a brewery isn’t really indicative of the kind of beer they serve, but I might be their target demographic: bearded and thirsty for suds.

The brewery itself is nestled away from the street on Delaware Avenue, in central Longmont. The location it’s pinned on in Google Maps is wrong, so drive past the St. Vrain Valley School District building it tells you to walk into, and you’ll see the unmistakable “ẞ” logo, as well as the outline of a well-groomed beard surrounding the brewery’s name. If you manage to find the tasting room, the place certainly delivers. While I was a bit uncomfortable with the posters showing Confederate generals and the Stars and Bars (I assume hung up for the well-known beard growing prowess of gentlemen of the South during the Civil War), the spot is open, industrial, and inviting. On the shelves sits a healthy supply of beard-centric merch, including distinctive beer glasses, t-shirts, and even beard oil. Every beer on their menu (and they had thirteen during my visit), was named after a facial hair style, from their Full Beard IPA, all the way to their Baby’s Butt Ginger Ale. Perhaps my favorite part of the brewery experience was every person I saw pouring beer behind the counter had a full beard. I’m very glad they all lived up to their brewery’s namesake. I’d be confused if I saw some smooth chins floating around. Let’s get it in!

Sometimes, I love a good English ale. Why? I can’t think of a better style to show off the full 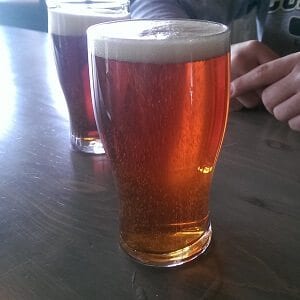 and sometimes fruity characteristic of a good grain bill, if the beer is done properly, of course. They’re even better when they’re from a cask, and served at cask temperature, which this one sadly was not. Not to be deterred, the beer came with a frothy and thick head, which retained beautifully.  The beer itself was a clear amber, and smelled distinctly of the English malts very evidently used. The flavor… wow! Immediately upon first sip, the strong maltiness that you’d expect hit with this beer, but it hit like a ton of bricks being thrown off of the Tower of London. A problem that a lot of English-style ales face is they suffer from tastelessness to promote their sessionability. Not so with the Ducktail. While this beer sits right around average ABV for beer, the flavor was full, strong, and slightly sweet. Keep in mind, this is not a bad quality at all; the beer was still smooth and crisp, and absolutely delicious. Now, THIS is the beer that I would order over and over again if I didn’t want to try some of the other hilariously-named beers that Groẞen Bart had to offer.

As we all know, I’m a big fan of the hops. For me, the more hops, the merrier. On the other hand, I 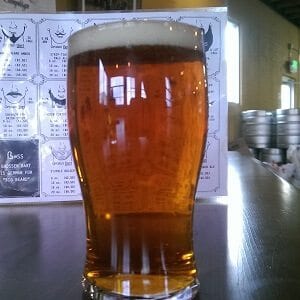 do appreciate a well-balanced, crisp beer. As per this beer’s description, the Strip-Teaser is intended for people who are not sold on the full-bodied and full face-pucker that often comes with an IPA. Rather, this is the IPA’s more toned down brother. I received the beer, complete with an amber/gold color, with exceptional clarity, and a thin head. I would have probably liked a head that retained a bit longer, but that’s alright. On the nose, the beer is a bit earthy, sweet, and piney. The flavor, unfortunately, was a bit too muted for my taste. Yes, the strong resonating flavors of hops and barley were present, but overall, the beer seemed a bit watery and muddled. With an ABV this high, I’d expect a beer with a little more… oomph to it. I realize that by the description the beer is suited for those with an aversion to IPAs. Perhaps I’m not the right guy to try the beer. Also, perhaps the very flavor-forward and sweet Ducktail that I had before this spoiled my palate a little bit. Either way, this one isn’t for me.

Now, I didn’t actually order this beer. In fact, one of the bearded men from behind the counter 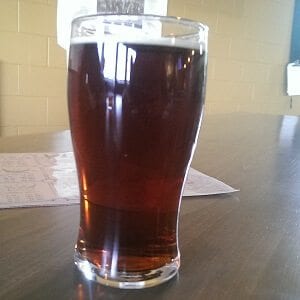 walked it over to my friend and me, and asked if we wanted it. Apparently, it was left over from a beer tasting, and figured us two burly men were the proper people to offer free beer to. Well, he was absolutely right. Brown ales are interesting, because they can be extremely hoppy, or extremely malty. They sit in this sort of beer limbo between the dark and roasty characteristics of porters and stouts, and the lighter ambers and pales. This one came to us with no head whatsoever, but I assume that’s because it wasn’t freshly poured. It was still cold, so I wasn’t worried. On the nose, this one is all nutty. There wasn’t much hop characteristic to this beer. Rather, this one was all malt, and all hazelnuts. Imagine a beer made entirely with Nutella, and you get an idea what this one tasted like, minus the cloying sweetness and shame that comes with eating an entire jar of the famous hazelnut spread (I’m not proud). No, this one was smooth, slightly sweet, with strong chocolate, and of course, hazelnut. Redemption!

I may not be all that Irish (unless you count sporting green on St. Paddy’s), but boy, do I love me an Irish stout. Perhaps it’s just my affinity for Guinness, which, I don’t care who you are, you’ve had, 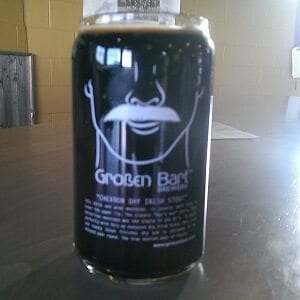 and you’ve probably enjoyed (unless you’re Irish Protestant; in which case, Murphy’s is delicious too). The Chevron sits a little bit lower ABV than many Irish stouts, and came to us with dark brown, almost cocoa-colored heads. The beer itself was dark as night, and had a faint bitter aroma to it. On the taste, if you’re expecting something like Guinness, this one’s not like Dublin’s finest at all. I would say, when it comes down to it, this one is far more dry, with the seemingly-aggressive hops bill shining through. This results in a beer that is more aggressive and biting than a typical Irish stout, but that is in no way a bad thing. It’s certainly not what I expected, but I did really enjoy the beer. This beer was designed to be sessionable, with a low ABV, and a surprisingly medium body. If you’re looking for something dark, but something you can sip on all night (Groẞen Bart is open til 1:00 A.M. on weekends), this would be it. Just make sure to remember to get the foam out of your mustache.

Groẞen Bart is new to the taproom scene, joining the handful of others in the town of Longmont. I’d say, based on today’s showing, there is quite a bit of promise in the beers these guys are pumping out. Check them out, learn about Civil War history (and facial hair fashion), and enjoy any one of their massive variety of brews. Also, lads, step away from the trimmer. Your face will thank you.