Chief Niwot and the Curse of Boulder Valley

Chief Niwot (which means “Left Hand” in English) was a leader of the Southern Arapaho tribe born around 1825. He spent a great many winters in Boulder Valley, particularly at Valmont Butte, which is considered a sacred site for the Southern Arapaho. 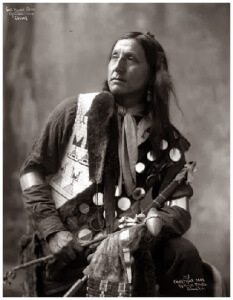 In 1851, the United States signed the Treaty of Fort Laramie with the Arapaho, Cheyenne, Crow, Sioux, Assiniboine, Mandan, Hidatsa, and Arikara nations. In it, US government acknowledged that much of the land between Oregon and the Rocky Mountains belonged to these tribes and in return, the Native Americans would allow wagon trains of settlers and gold prospectors headed for California to pass through the area without being harmed. Road and forts could also be build on this land in exchange for $50,000 a year to be paid to the aforementioned nations for the next fifty years.

But during the Pike’s Peak Gold Rush in 1858, a group of white prospectors rode from Fort St. Vrain into Sunshine Canyon, where they were met by Niwot and several other members of the Southern Arapaho tribe. The chief’s encounter with these prospectors was not his first meeting with white men; his sister had married a trapper named John Poisal, and Niwot had learned English from him. This, along with his diplomatic skills, made him the ideal emissary for his people.

Niwot greeted the prospectors in peace, but he also told them that they needed to leave, as they were on Araphao land. When they balked at the idea, he threatened them, and the atmosphere became tense. Niwot remained with the white men, who attempted to bribe him with alcohol and canned food, into allowing them to stay. Meanwhile, Niwot‘s deputes, Bear Head and Many Whips, began to gather their men at Valmont Butte to attack the prospectors.

However, peace ultimately prevailed. One of the Southern Arapaho’s wisest men is said to have had a dream in which a cataclysmic flood took place, drowning his tribe but sparing the white people who had recently come into the area. This dream seemed to be a warning: the white settlers and prospectors would come no matter what, and Niwot was powerless to stop them. Niwot, along with another local chief Little Raven, made peace with the white people to avoid bloodshed.

But peace was not to last. After a family of settlers was murdered by four Native American warriors in the summer of 1864 near what is now Elizabeth, Territorial Governor John Evans ceased to differentiate between the peaceful tribes and those who were antagonistic towards the whites. He ordered that all tribes be relocated to the eastern plains. The results were ultimately tragic.

The governor told the Southern Cheyenne (lead by Chief Black Kettle) and the Southern Arapaho (lead by Chief Niwot) to camp along the Big Sandy River, roughly 40 miles from Fort Lyons. There, they were promised safety. Black Kettle even flew the American flag to show that the two tribes were not hostile. Feeling secure, many of the warriors left to hunt buffalo, leaving only women, children, and a handful of old men at the camp itself.

On the morning on November 28, 1864, 700 members of the Colorado militia attacked the encampment, lead by Colonel John Chivington. While some of the cavalrymen refused to take place in the massacre, most did. In the end, over 100 Cheyenne and Araphao women and children were killed, despite Black Kettle’s attempts to intervene by raising a white flag of surrender when the militia began to fire at them. Chief Niwot himself was wounded in the attack and died several days later. 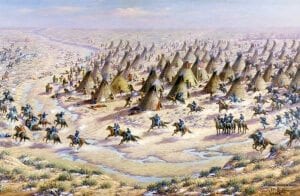 Despite the fact that the massacre took place at the height of the Civil War, it was brutal enough to warrant President Lincoln demanding an investigation into what had happened. Congress ultimately declared that it the incident was “gross and wanton”, censured Colonel Chivington for his involvement (which ensured the end of his career), removed Governor Evans from office, and placed Colorado under martial law.

Famously, Niwot is said to have given the “Curse of Boulder Valley” to the settlers before he died. “People seeing the beauty of this valley will want to stay, and their staying will be the undoing of the beauty,” he said. Whether or not you believe in Niwot‘s Curse, there is certainly truth to the idea that many people who come to Boulder either decide to put down roots or, after leaving for a time, return to it.