Throughout the ages as human society has developed our planet and conquered new frontiers, people brought with them all sorts of things.  Including other species. Anthropogenic development has allowed other species to inhabit places once not accessible to them by riding on the metaphorical coattails of humanity.  In fact white-nose syndrome, which continues to devastate bat populations across North America, arrived in North America on the actual bottom of someone’s shoe that the person had worn spelunking.  Invasive species can cause no major issue for their new environments but can also completely alter an ecosystem. A very interesting invasive species that is flourishing across the United States is the Coyote-Wolf hybrid. 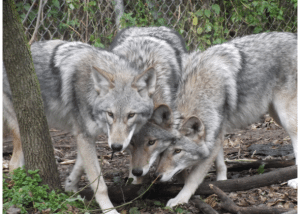 Coyote-wolves are also known as eastern coyotes or coywolves. In 2009 a report came out with “DNA evidence [that revealed] coyotes have bred with wolves in the the northeastern United States, turning mice-eating coyotes into much larger animals with a hunger for big prey, such as deer”.  The population of this hybrid species has been on the rise across a vast region in the eastern half of the United States.  Coywolves may fill a valuable niche and are thus eco-friendly, but could prove extremely dangerous to humans.  According to LymeNet, not a month after DNA evidence proved that coyotes were breeding with wolves in the northeastern United States, a woman in Nova Scotia was killed by one of these coy wolves.  Coywolves play a valuable role in their environment by acting as population control for overpopulated mammals such as deer in the northeastern states.

According to Lakeland Times, coywolves are more likely than regular coyotes to encroach on human environments. They are also more aggressive, more intelligent than coyotes. Coywolves are larger than your average coyote and nearly twice as large in weight. Even though they aren’t as large as their grey wolf counterpart they still feed on deer instead of small prey such as the mice that their coyote heritage feeds on. This new hybrid is physically more deadly than the coyote and also displays more dangerous behaviors. One of the more scary behaviors of coywolves is their stronger pack mentality. Coywolves will travel in packs large enough to desolate campsites and kill groups of people. As populations of coywolf flourish, it is very possible that the safety of people in the outdoors will be jeopardized. 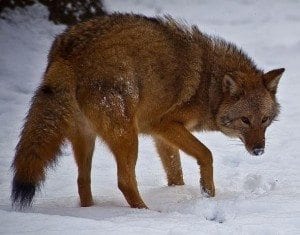 There is reason for the genuine concern about this species growing in numbers and spreading across North America. According to the Huffington Post, “Coywolves are flourishing in major cities… while they have been around for about a century…. [coywolves have] begun infiltrating cities only very recently”. According to the Canadian Broadcasting Corporation, “In Canada, coywolves… are flourishing in southern Ontario, Quebec and throughout the Maritime provinces”. The coywolves’ have a large range and “can also be found all along the northeastern seaboard of the U.S.A. from New York State to New Hampshire and even into Rhode Island…[and] is starting to move as far as Pennsylvania”.

Coywolves are dangerous but “benefit ecosystems, since they appear to be filling niches once occupied by wolves that were eradicated by humans”. The coywolf population is on the rise and spans from the Great Plains all the way to Nova Scota and Pennsylvania. The species is stretching its numbers across North America. Will this have to become a concern across the Midwest in the future? If the safety of campers and people enjoying nature is threatened across the United States by the possibility of assault by coywolves, does this species deserve protection in order to fill its valuable niche?