Home › Blog › FATE Brewing: Drinking in the Land of Hops and Collaboration

FATE Brewing: Drinking in the Land of Hops and Collaboration

Sometimes, friends, it just hits me. I wake up in the morning, and after a strong cup of Kona, after a solid breakfast made up of a bowl of oatmeal and maybe half a bagel, I say to myself, “I could really use a hoppy beer right about now.” Perhaps this is indicative of a much larger problem in my life, but that’s beside the point. Sometimes, friends, I know that on that day, I will want to get the hoppiest, bitterest, and most floral barley water I can possibly find. You know the stuff; the kind that would make a child swear off drinking forever, if dad ever let them have a sip. So, for this week’s beer bonanza, I sought out hops. My journey actually didn’t take me all that far from where I currently live (also indicative of the kind of adventurer I would be). Perhaps it was Fate.

Fate Brewing Company is a relatively new spot, popping up in eastern Boulder in 2013, bringing 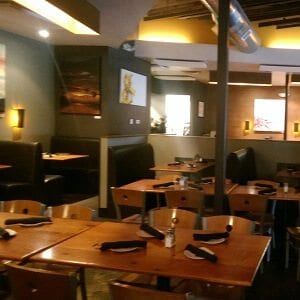 another spot for beer and food junkies to explore. With a cherry location, just east of 30th street on Arapahoe, Fate is generally a happening place all the time. Despite being a brewery first, the tap house has a full lunch and dinner menu. Unlike many brew pubs, however, Fate’s menu is certainly elevated, and will certainly cost you a pretty penny. The space itself is massive; dim, recessed lighting softly blankets the interior, forming a strange juxtaposition with the bright, sunny day outside. While the restaurant is mostly booths and tables, I took a spot at the horseshoe-shaped bar in the center of the space, attracted by one of the brewers who was industriously hammering away at a firkin of IPA.

Fate is extraordinarily well known for their collaborative spirit. By working together with local farms, coffee houses, and even breweries, Fate offers a substantial line of brews that they’ve created with help. On top of their collaborations, Fate is always coming out with something new. A poster on the wall reminds you to come back on a Sunday or a Monday, when a new beer is rotated into the ever-revolving tap lineup. During my visit, the brewery had no less than 21 beers available. Of those, a little over half were styles that put the hops first (i.e: pale ales and IPAs). With that in mind, that’s why the beers I tried this week were all similar. Not only was I craving some insanely hoppy beer, I would say hops is one aspect of brewing that head brewer Jeff Griffith is known for. Three hoppy beers, but three vastly different styles. Let’s get it in!

I certainly hope the name didn’t surprise you as much as it surprised me. No, this beer isn’t paying 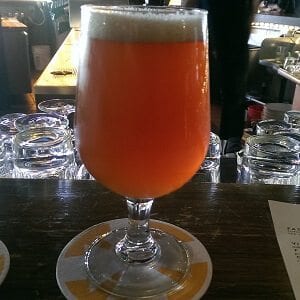 homage to the proprietors of The Troubles in Ireland in the 60s and 70s (we already have an alcohol pairing in the US that does that quite well). No, the IRA is just the abbreviation for India Red Ale. It’s pretty simple, really. You take a robust red ale, and then you throw in a bunch of Azacca and Mosaic hops into the boil, and you wind up with something way too hoppy to be a standard red. So, this beer came out to me with a beautiful fiery red body, and a creamy, pale head. On the nose, this beer simply reeks of hops, but not in the way that you might expect. For any hop nerds out there, you’ll know that Azacca and Mosaic hops are both often used to achieve a sweet, tropical, almost berry flavor in beer. Sipping the beer confirms it. It’s bitter, yes, but the IRA has a spectacular guava and pineapple flavor, without the use of any fruit adjuncts. This allows for the natural character of the grain bill (I’m guessing roasted barley, but what do I know?). It has a really fine malty undertone, that mixes very well with the fruitiness that permeates the beer. Have a friend who is generally afraid of hoppy beer? This might be a little strong for them, but it certainly won’t scare them away. Alright Fate, you’re 1/1. Let’s see what’s next.

Yes! Finally a chance for me to use some of that Greek history that I have accumulated in my brain from teaching it for a few years (shout out to any of the Twin Peaks family that are reading. You guys are great!). The Moirai are the three sisters of fate. You might recall them as those horrifying old 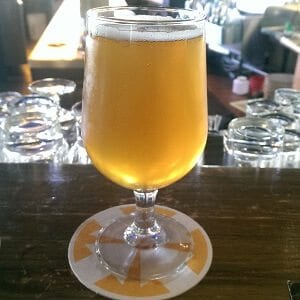 women from Disney’s Hercules cartoon. You know who I’m talking about; there’s that short one with one eye? Anyway, while portrayed as villains in that film, the Moirai were more arbiters of fate, making sure that every mortal’s life follows what has been predetermined for them. Fitting name for the beer, I suppose. It’s a semi-opaque, golden honey color, with a sadly absent head (I’ll blame that one on the bartender). On the nose, it’s a delightful mix of grass, grapefruit, and orange zest. The flavor, however, is a bit different than what the smell might indicate. The Moirai has a very malty backbone. My immediate first taste on this beer was all crystal malt and barley, followed almost immediately by the expected hop deluge. This one has all the big names in hops in it, as well – Chinook, Cascade, Columbus, Amarillo, Eldorado, and Summit. The beer has a nice piney, fruity flavor to it, with an exceptionally dry finish that remains incredibly balanced throughout the glass. It’s certainly bitter, and certainly not a beer for those new to IPAs, but it was certainly a beer I would come back for again.

Clotho is the name of the youngest of the three Moirai, and she was in charge of spinning the threads of fate. In the world of Greek mythology, that equates to a pretty big freakin’ deal. She basically got to decide when people were born, and could also determine if people died, or could be resurrected. 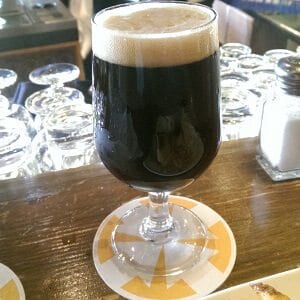 Clotho is the fate of living in the moment, and reminds us that life is precious, and can be snipped short at any time. With that being said, it’s on to this third style. This beer is a dark chestnut brown, completely opaque, and it sports a tan, frothy head. This one perhaps smelled the hoppiest of any of the beers I tried today, which is strange, considering that the Cascadian Dark IPA, otherwise known as a Black IPA, is designed to be the balancing point between the light and the dark side of brews. The flavor followed this trend. I found the beer to be incredibly bitter, almost cloyingly so. While there might be the most subtle of caramel flavors hidden in the beer, it’s almost completely swallowed whole by the aggressive hop attack that this beer delivers. I’m certainly glad it was the last beer I had on the day. If this was the first, I would not be able to taste anything else. This one missed the mark for me. I really like this style, and I do oftentimes like a really hoppy beer. With that being said, however, I like a strong, hoppy beer when the hops contribute to the overall flavor profile of the brew, not just to say “this will make your tongue fall out! Hooray!” Check, please!

Overall, I’d say my quest for hops ended in a success. I got to check out a popular local watering hole, I got to brush up on my Greek mythology, and I got to drink some unique and tasty beer. With a solid happy hour, a few delicious menu options, and more beers than you can shake a stick at, Fate is certainly a place to try. It’d be worth going back for me, to try many of the non hoppy styles that they produce on the list, such as their GABF gold medalist Laimas, a kolsch style. Fate may not have the best brews on the block; however, as a place to hang, eat, and imbibe, it’s a strong contender.