Living in Colorado, one has to acclimate oneself to the ever-present kitsch of the “old west” aesthetic. Whether you’re being referred to as “pardner” every fifteen seconds, or donning a mining helmet while frontier folk sing Little House on the Prairie to you, sometimes you just have to throw your hands up, tighten your britches, and say “yee-haw.” Frankly, exposing friends from out of town to this frontier pride, specifically friends from the east coast (where anything west of Pennsylvania is still controlled by roving posses of bank-robbing bandits, as far as they’re concerned), is one of my favorite activities. And to be perfectly honest, it’s one of the major pluses of living in a state like this. Look, we’re proud of being born by gold-crazy prospectors, and I don’t think it’s all that different from the Revolutionary-crazy 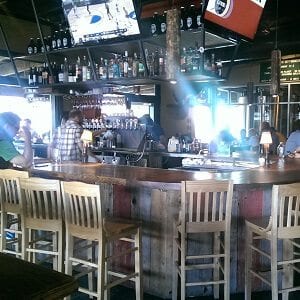 reenactors who will inevitably exist in every hovel and township across New England.

So, maybe it wasn’t the vibe that Dave Query was going for when he opened The Post Brewing Company in 2013. Query, a self-proclaimed Kentucky man has had the dream of opening a chicken and beer joint for a very long time. Perhaps, by opening up a restaurant that features fried chicken and biscuits as their staples, Query was attempting to invoke the spirit of Southern easy livin’, but that is simply not the vibe that comes across. No, The Post, named after the Veterans of Foreign Wars Post 1771, which inhabited the building prior to the brewery operation, is all Colorado. It’s a strong representation of the small-town American values that Lafayette, Colorado was founded upon. Good food, good company, good drinks. And you know what? Sometimes, some down-home, small town fried chicken and beer is exactly what the doctor ordered (and by doctor, I mean one of those small-town doctors of the late 19th century who would prescribe whiskey for the common cold).

Walking into The Post, you start to understand what you’re getting into as soon as the unmistakable mesquite aroma hits you. This is a place to have some lunch, listen to some music, and wash it all down with some easy to drink beer. As Bryan Selders, brewmaster at The Post, puts it: “It would be a tremendous disservice to [our chef] and to our guests to overwhelm palates with what is coming out of our brewery.” By design, these beers are unoffensive, light, and are designed to accompany a plate of yummy fried vittles. Fair enough. On today’s trip, I made sure to try a variety of The Post’s offerings, while being mindful of the fact that they are without strong flavor notes by design. Let’s “hop” to it! (Waka Waka.)

How do you pass up a beer called The Howdy Beer? Short answer, you don’t, especially considering this yellow fellow brought home silver at The Great American Beer Festival in 2014. Certainly, anything in the pilsner style is going to match that aforementioned philosophy 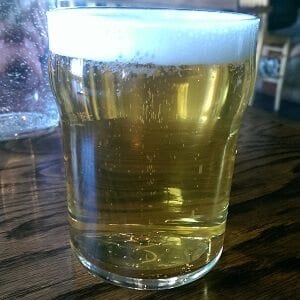 of not wanting to overwhelm the palate, and the Howdy drinks exactly as you’d expect. With a surprisingly thick head, and a lovely straw yellow body, the beer is crisp, effervescent, and only the slightest bit bitter on the tail end. While the aroma of hops is surprisingly absent, the beer had some obvious early-boil additions of some piney American hops, and finishes very dry. As advertised, it’s incredibly easy drinking, and the hops regimen certainly does not overpower the delicate malts essential to a crisp and drinkable pils. Obviously, if you’re grabbing for this style in the first place, you most likely want something that won’t smack your tongue strong flavor. To me, it’s very much the beer you get your dad to drink to gently encourage him to try anything other than the domestics he’s been slogging back for twenty years. For me, I gotta have something a little more flavor-forward, even if I am stuffing my face with a rotisserie chicken, flavor profiles be damned. For fans of the style, this one surely won’t disappoint.

Here, another beer that has a name that reflects the brewery’s small-town pride. Billed as the everyman’s beer, and a local favorite, I really needed to get my hands on it. Plus, I’m a sucker for pale ales, especially when my waiter advertised this one as an “East Coast Style 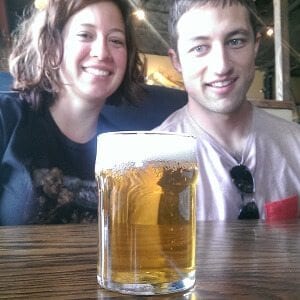 pale ale,” something you don’t hear all that much on this side of the country. The beer is topped with a thick and foamy head, which retained throughout the entire nine ounce pour. The distinct bitterness of American hops is what is predominately on the nose here, with maybe the slightest bit of grapefruit or orange to complement the smell. I found the beer surprisingly more hoppy than I was anticipating, which is not a bad thing at all! I love me some hops. The beer has an interesting, albeit slightly syrupy and sweet finish, which complimented the bitterness of the hops incredibly well. Overall, I’d say the beer is remarkably balanced, and earns its namesake very well. Hop haters be warned, though. While certainly not the hoppiest concoction I’ve had, it’s has a deceptive and tangy kick right on the front.

Now, to explore the darker side of The Post’s offerings. This one gets its name from the large stuffed elk head hanging over the patio door, and is dark as sin. With a latte colored head (again, very persistent! How do they do that?), which crowns this ruby brown beer, it’s truly 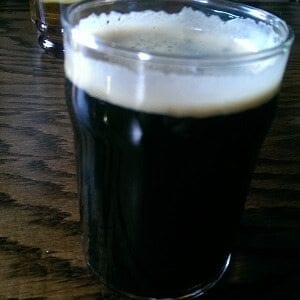 the smell of hops that surprises the most. Big Rosie has been dry hopped with some delicious secondary Cascade and Willamette hops, which balances out the dark and roasty flavors from the black malts. Flavor-wise, the beer is all coffee, caramel, and chocolate, with a strong and hoppy, almost fruity undertone. I’ll tell you what: as I am a fanboy of the Black IPA craze that hit this country some four years ago, I appreciated the balance between the chocolatey malts and the citrusy, fruity hops that this beer amounts to. Much like the New World Porter, made famous by Avery just up the road in Gunbarrel, Big Rosie is not your typical porter. I’ll say again: it’s not your typical porter. If you’re looking for a beer without that hops pucker, you’re going to have a bad time with Big Rosie (no matter how friendly she looks hanging in the corner of the restaurant). For me, though, I thought the combination of hops and dark malts was delightful. With a slightly lower alcohol content, I may have ordered one or two more.

The Post is certainly a family-friendly establishment, which is perfect for the large number of families present in East Boulder County. Bring your kids (or not), bring an appetite (or not), and bring a hankerin’ for some good ol’ downhome brews (a must).