After the publication of the International Report on Climate Change by the United Nations, a few things were made very clear according to an article on TheGuardian.com. One of the truths that rang loudest is that carbon emission reductions will be a necessity in order to decrease the severity of the impacts of climate change. Reducing the amount of atmospheric carbon an individual pollutes can be very difficult. While someone might be very carbon conscious, they may have no control over certain aspects of life that create pollution. The U.S.’s Energy Information Administration’s website and TerraPass’s online carbon footprint calculator has all the information needed to calculate an individual carbon footprint. Finding means of reducing a carbon footprint often requires spending less money on energy and transportation.

Driving:  If a person drives about 6000 miles a year at twenty-three miles per gallon, they are burning 261 gallons of fuel a year. For each gallon of fuel burned, about 19.64 pounds of carbon dioxide are produced according to the U.S.’s Energy Information Administration. Thus, this particular person is releasing approximately 5,126 pounds of CO2 per year through driving.

Flying:  A round trip flight from Denver International Airport to La Guardia Airport in New York and then back to Denver is 3,228 miles. If someone takes this round trip flight three times a year, it would add 3,777 pounds of carbon dioxide annually to their individual carbon footprint according to TerraPass. 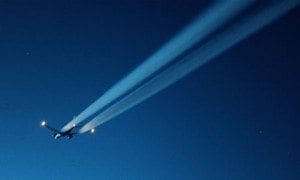 The rest of an individual’s carbon footprint primarily consists of Purchased Goods.  All manufactured and transported goods have some form of atmospheric pollution as an external cost.  When a good is transported across any distance, fuel is required for the transportation.  The emissions from the fuel used for the transportation of a good is part of the carbon footprint of the person who buys it.  The increase in an individual’s carbon footprint from purchasing a car from Japan is much larger than buying fresh produce from a local farm. 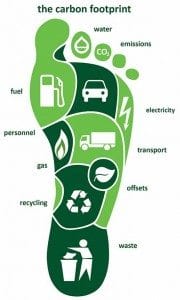 Americans have a much larger carbon footprint on average than the rest of the world. The carbon footprint average of the world is about four tons of carbon dioxide annually, while “the average North American generates about 20 tons of CO2… each year”. (Walser)  Carbon emission reductions will absolutely be a necessity in order to decrease the severity of the impacts of climate change. Even for a carbon conscious person, reducing the amount of atmospheric carbon that is polluted can prove very difficult. An individual must understand how a carbon footprint is generated in order to curb their own.