There’s a very real conundrum at the heart of film criticism. On the one hand, most people don’t really understand exactly how hard it is to make a movie. First, you need a script that’s either a) good, b) marketable, or c) both. Then you need to figure out how much it’s all going to cost. Then you need to get your hands on the budget. Then you need to actually make the movie and deal with the million-and-one problems that accompany the filmmaking process. Finally, you need to get your movie in front of other people’s eyeballs, and pray to eight pound, six ounce, newborn baby Jesus that they like it.

On the other hand…what if your movie isn’t good? I’m not talking about something as phantasmagorically bad as The Room, a movie that becomes a success based on failing well. Instead, you have this idea or script, and you shepherd it through the development process for, oh, let’s say about fourteen years. The stars align, your movie gets made, and the end result is that it kinda just sucks.

Making matters worse, one of the most vile and subhuman forms of life will inevitably come into contact with your movie. A person wholly lacking in moral fiber, taste, and basic human decency. This person has the temerity to sneer at the thousands of hours of work you put it, and with a few cavalier paragraphs, dismiss your work. I am, of course, talking about film critics.

Look, I’ll be uncomfortably honest with you. Writing a review of a bad movie is fun. You get to trot out some jokes, channel your aggression safely, and feel like you’re striking a blow for good taste on behalf of moviegoers everywhere. Should I feel guilty trashing a movie that’s lazy, stupid, and a shameless rip-off? Okay, you twisted my arm. Let’s talk about Den of Thieves.

We’re first provided with some ominous text explaining that Los Angeles is the bank robbery capital of the whole stinking world.* With great subtlety, this sets the scene for an armored car stopping at a doughnut shop. A group of heavily armed masked men approach in an SUV and proceed to hold the armored car drivers at gunpoint. Police arrive. A cup of coffee is dropped, which sets off a hail of bullets. After the masked men make their escape with the armored car, we meet Merriman (Pablo Schreiber), their leader. He helpfully notes, “Now we’re cop killers.”** Better yet, it turns out the armored car is empty.

Guess what, kids? We have a mystery on our hands! What we need is an experienced and intelligent cop to make sense of the carnage and bring the perpetrators to justice. Unfortunately, we get “Big” Nick O’Brien (Gerard Butler). He’s an L.A. sheriff who’s belligerent, unnecessarily aggressive, corrupt, and probably a drunk. “Big” Nick doesn’t seem to be particularly good at his job, since he’s been tracking Merriman’s crew for quite some time. But he sure is great at yelling and hitting people! 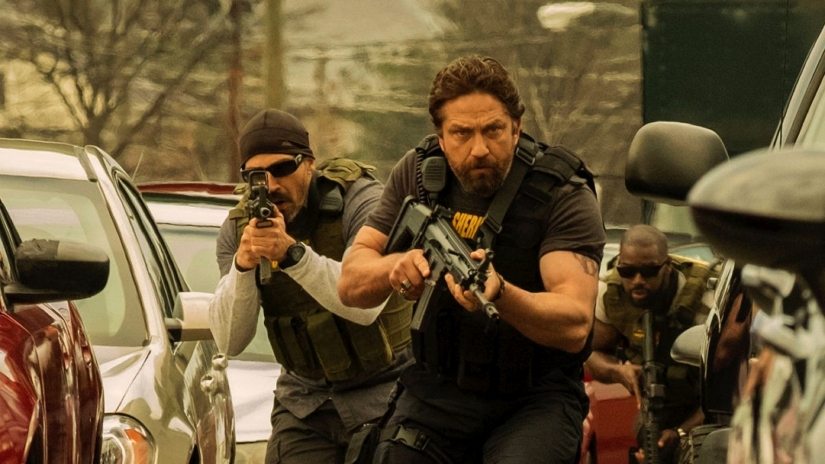 Anyway, Merriman has a brilliant plan. His scheme involves the Federal Reserve, and old money going out of circulation. When the serial numbers of the money are erased, the bills are shredded. But if Merriman and his crew were to nab the old money, it would be untraceable. His lieutenant Levoux (50 Cent) is all in, as is Donnie (O’Shea Jackson Jr.), a bartender and wheelman.***

Anyway, the heist is planned. “Big” Nick and his quasi-rogue team try to keep up, and we also have a dull subplot establishing that he’s a lousy husband and father. Big surprise, there. Anyway anyway, complications ensue, problems occur, guns are fired, macho posturing takes place, and I valiantly struggle to give a damn.

Look, Den of Thieves is far from the worst movie ever made. This is director Christian Gudegast’s debut film. From a technical perspective, it ain’t bad. His action sequences are cleanly shot, and with one exception he’s cast the film well, Gudegast is clearly a student of heist films, and there are moments he has fun jacking up the tension with unexpected problems the cops and crooks run into.

Problem number one is the script, written by Gudegast and Paul Scheuring. These two clearly love Michael Mann’s Heat, the sprawling crime saga starring Robert De Niro and Al Pacino. Mann’s film has one of the greatest gunfights in film history, and a wary and respectful relationship between a hotheaded cop and a smooth criminal. Den of Thieves does not have a compelling dynamic between cop and crook. Nor does it have existential musings on the transformative nature of work or a clear-eyed look at underworld and law enforcement professionals. Instead, we have a bunch of two-dimensional characters yelling macho nonsense at each other. Why is “Big” Nick a shambling wreck? Why is Merriman compelled to rob banks? We never get compelling character motivations. Instead, we get obvious callbacks to better movies like Heat and The Usual Suspects.

Problem number two is the punishing length of the film at two hours and twenty minutes. Yes, I’m aware that Heat is two hours and fifty minutes. While Heat could stand to have a few scenes trimmed, most of it is necessary to establish either character or processes in the story. With Den of Thieves, scenes arrive and establish a point, then spend additional time hammering home the point. Easily half an hour could have been cut from this film.

Problem number three? Let me lead off by saying most of the cast is solid and do what the script and their director requires of them. I bought the intelligence of Pablo Schreiber’s Merriman, and the cool professionalism of 50 Cent’s Levoux. I particularly liked O’Shea Jackson Jr as Donnie. Jackson is an intelligent and charismatic actor, and even when he’s stuck in crap, he’s able to partially elevate the material . 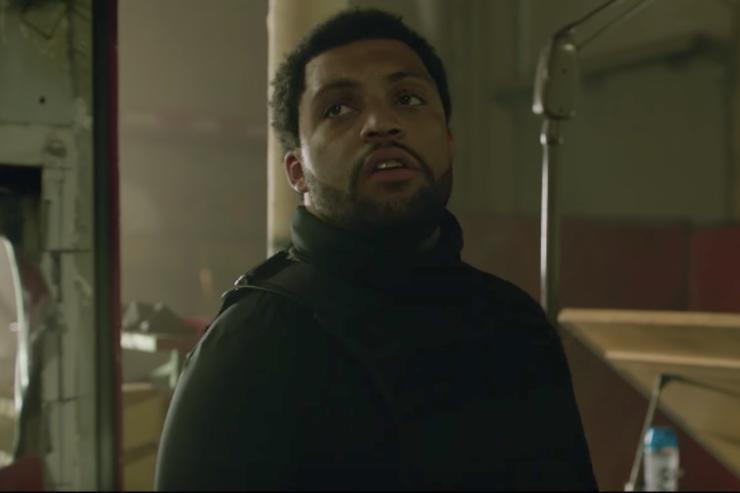 No, problem number three is Gerard Butler. Take a gander at Butler’s filmography, and you’ll quickly notice that he’s not the world’s most consistent actor. While his role as a Secret Service agent and head stabbing enthusiast in Olympus Has Fallen was fun, he’s also got inert roles in movies like Gamer and The Bounty Hunter to answer for. Hollywood hasn’t quite known how to utilize Butler effectively, and he often ends up playing blustery tough guys. Butler can be both likable and compelling onscreen. As “Big” Nick, he’s neither of those things. Instead, he’s an abusive control freak who’s frankly not very good at his job.**** Butler’s character is like your uncle at Thanksgiving aggressively yelling about immigrants stealing jobs, and every scene with him became a chore.

Is Den of Thieves career ending? I don’t think so. Christian Gudegast will hopefully find smarter (and shorter!) scripts to direct. Gerard Butler will take a role that reminds us why we like him. Someone will make a heist film that’s as smart and powerful as the greats in the genre without ripping them off. Everyone will move on, Den of Thieves will be forgotten, and not even the snotty opinions of a film critic can change that. 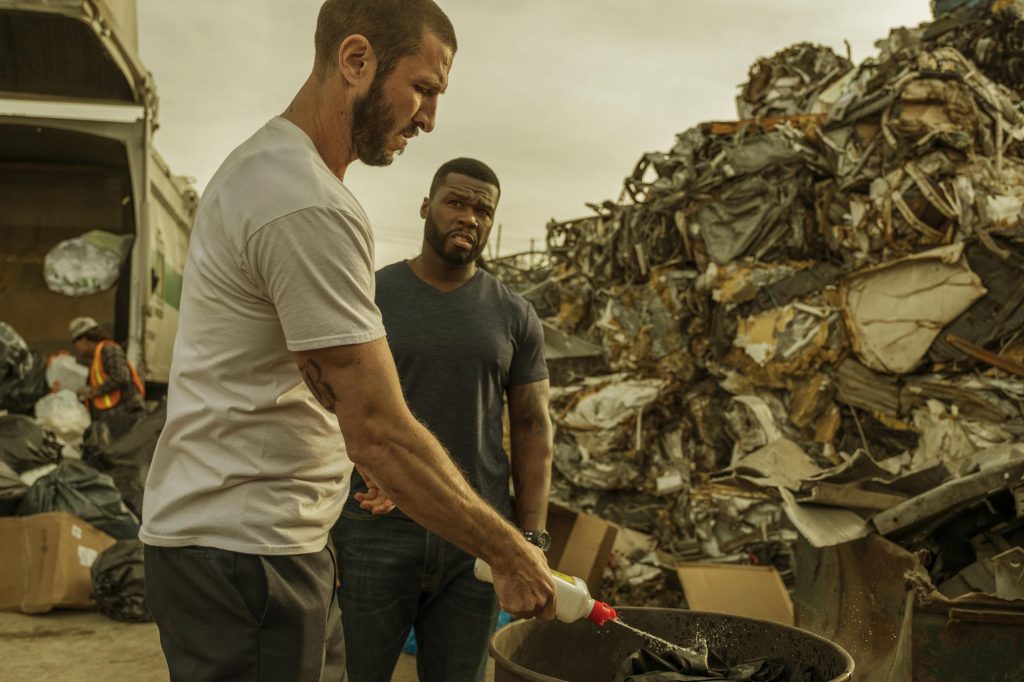 *Nope! According to our good friends at Fox News, that hasn’t been the case since 2014. As a matter of fact, crime rates have been dropping overall for the most part. But go ahead and keep being scared of undocumented immigrants, knock yourself out.

**I was hoping he would follow up this blindingly obvious statement with, “That’s because we panicked and fired bullets at them, which caused numerous gunshot wounds that led to their deaths.”

***Who is recruited for his kickass driving skills, then spends the duration of the heist disguised as a Chinese restaurant delivery guy. Not a great plan, in my opinion.

****Over 1,100 people were killed by police in 2017, and 25% were black. When black people are three times as likely to be targeted by police as white people, is it a smart move to make a kickass action movie where a white cop is abusive toward a black man and puts him in a chokehold? Probably not.

Tim Brennan
Tim has been alarmingly enthusiastic about movies ever since childhood. He grew up in Boulder and, foolishly, left Colorado to study Communications in Washington State. Making matters worse, he moved to Connecticut after meeting his too-good-for-him wife. Drawn by the Rockies and a mild climate, he triumphantly returned and settled down back in Boulder County. He's written numerous screenplays, loves hiking, and embarrassed himself in front of Samuel L. Jackson. True story.
See More Articles From Tim Brennan
Tagged: 50 centchristian gudegastden of thievesgerard butlero'shea jackson jrpablo schreiberpaul scheuring
Boulder Colorado Air Quality